When SUNY New Paltz student Ian Todaro, 24, started Seminar in Digital Filmmaking (DMJ445) last semester he wasn’t trying to be an award winning filmmaker. When the Digital Media Production major, along with fellow students Ryan D’Angelo-Sylvia, Juliana Hedeman, Victoria Ottomanelli and Sasha Ribowsky finished the course’s final project, that’s just what happened. “Waning Wolf” is a short documentary covering wolf conservation at the Wolf Conservation Center in South Salem, New York. I recently had a chance to sit down with Ian and ask him about his experience as a volunteer and filmmaker at the Woodstock Film Festival.

When did you make the documentary film “Waning Wolf”?
We made the film in the spring semester of 2014. So, from like January to May of 2014. It was for Seminar in Digital Filmmaking taught by Gregg Bray.

What made you want to choose this subject matter?
I knew about the wolf conservation center for a while and I’ve always been interested in wolves since I was a kid—they were my favorite animals. So I knew I wanted to do something with the wolves there, and when I knew I was going to have to make a doc for seminar, I immediately got in contact with them to see if they were interested. I was set to make this happen, and got in touch with them before the semester even started, it worked out nicely so when it was assigned, we we’re all set to go film that weekend.

What awards has it won? Did you expect to win any accolades when you first made the film?
As of right now it’s won a 2014 Telly Award and it won the 2014 Eli Jaffe film competition. No I didn’t expect to win anything, but winning Eli Jaffe is great because that means I beat out films from Dutchess community college—where I got my associate degree—Bard College, Marist, Vassar College and possibly other [films from] SUNY New Paltz . The film that was there from Vassar College, “Paper State,” went on to win the student portion at the Cannes Film Festival this year. I didn’t get a chance to submit to that this year.

With all the accolades you got for the film, did you get an A in the class?
I got most of the accolades after the semester, but yeah I got an A.

Was the film up for any awards at the Woodstock Film Festival? If so, did it win?
It didn’t win anything and I don’t even think it was nominated.

Did you meet anyone memorable?
I met Pauly Shore and that was awesome. He’s a really nice guy.  He walked into the hospitality building and I ended up talking with his assistant, Josh, a super nice guy, who went to SUNY New Paltz for a little bit before moving to California. I met Leah Meyerhoff too; she was really nice and, in fact, I took some photos for her with her lead actress of her film, “I Believe in Unicorns.”

What’s next for the film?
Just submitting to a lot more stuff. Cannes, the Catskill Mountains Film Festival, [National Film Festival for Talented Youth], SUNY-wide, BEA, anything else that I come across that’s free.

What are your goals after you graduate in May?
I really don’t know, I’d like to work in television, but I love comedy, so maybe something at Comedy Central or IFC, or some sketch sites? Who knows?

A Day in 'RANGERSTOWN'

Thu Nov 6 , 2014
The Little Rebellion’s own Russell Hartman attended the New York Rangers home opener on October 12. A Day In ‘RANGERSTOWN’ by Russell Hartman on Exposure 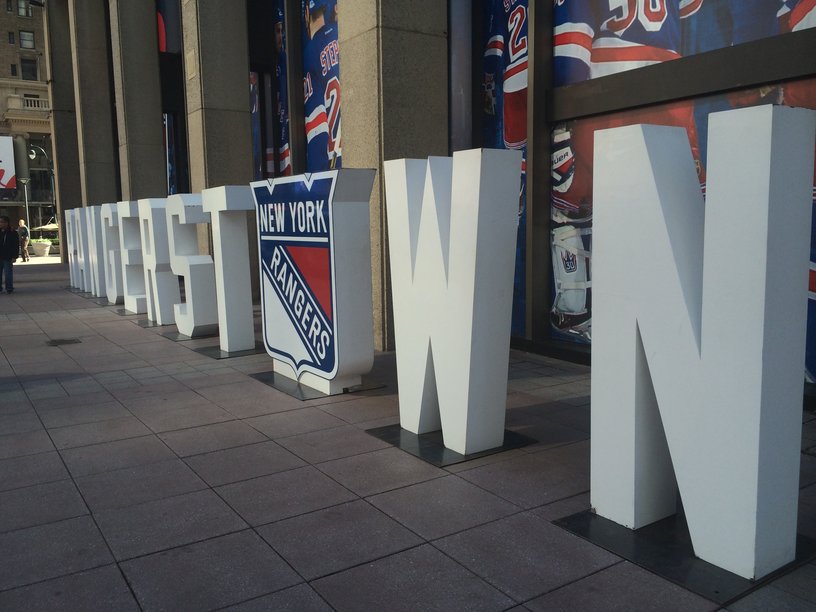