College students value their time, and Tapingo—at first glance—appears to be a miracle: ordering food via a smartphone app that allows for food to be customized, ordered and paid for in advance. The app also gives an estimated wait time for food to be prepared, which helps students plan ahead and save time.

Tapingo from The Little Rebellion on Vimeo.

Tapingo is currently featured in the Student Union in Starbucks, Sub Connection, Tokyo Sushi, Nester’s Grill and Pomodoro’s. In the evenings, Oscar’s and The Sweet Stop take advantage of the service as well.

Students in the past have complained about waiting on the lines for food, especially when they are in a hurry. One of the most crowded lines occurs when the food court Oscar’s opens at 6:30 p.m. The line, which sometimes stretches well past the entrance to the dining area, deters many students hoping to fill their growling bellies.

Campus officials said they thought the primary solution to this was the use of a stationary kiosk, a menu screen which would allow for customized orders at each dining location. However, passing so many students through the school’s network created a congested internet, and this made it difficult for students to receive the data they need to order. The idea for the project was discarded as a result.

“The lines are incredibly long and result is a huge problem for [food services] and the students,” Shariff Nickens, the retail manager at Sodexo, said. The availability of smartphones made Nickens consider moving the platform of the kiosk idea to mobile devices in order to increase accessibility for students.

Nickens saw the app from its development in Australia to its launch. The handheld device acting as a kiosk had a potential for success, but it was not until it had been employee-tested and switched to a software more compatible for New Paltz users that the app was officially brought to New Paltz.

“Blackboard, one of the largest vendors at the time, was the first logical step to take when the app worked well with it,” Christine Waldo-Klinger, head of the Campus Auxiliary Services, said.

This partnership allowed student’s transactions, dining dollars, and orders to be seen and kept track of without a need for a separate server – key to bypassing a complicated network.The app, California-based and only three years old, was eventually brought to New Paltz and several other universities.

Within the first three weeks of launch, Tapingo was downloaded 950 times. It is responsible for about 350 food orders per day, according to Waldo-Klinger.

According to the company, using Tapingo frequently can result in 17 percent increased sales for food courts, eight days waiting in line saved for students, decrease in line lengths and save students $40,000 dollars per location.

“With Tapingo, I was able to go back to my room sooner to relax, I honestly don’t know why people don’t use this,” second-year Joshua Jacob Van Vu said.

“After a late night class, I’ll head to Oscar’s five minutes away,” said Danny Klein, a second-year psychology major. “My food is always ready by the time I arrive.”

The app also offers multiple methods of payment and only requires one initial setup. Its convenience encourages frequent use and the food services benefit. However, the use of the app also means twice the number of orders for food service workers to process – those in person and those placed virtually through Tapingo. Students are often now being forced to wait twice as long for their food.

“I like it and I think it works well, but students crowd waiting for the store to open causing the lines to get long,” Jim Hinson, manager of Oscar’s, said. “This forces us to engage in the online orders first before we do the in person ones.

Oscar’s runs through a first-come, first-served model: but the orders through Tapingo, for example, are clocked in before the doors even open to the students waiting outside Oscar’s. Impatient students there in person are now forced to wait longer. The backed up lines are a result of the people who ordered from Tapingo showing up after people who got there early causing crowding and frustration.

“The completion timing is messed up that makes me wait longer than I expect to. That is why I don’t use Tapingo often,” Simon Li said, a second-year economics and mathematics major.

Additionally, Tapingo does not offer the customization students receive from in-person ordering, such as ordering toppings or drinks. Perhaps an even bigger issue is the lack of readability from receipts, lack of additional languages and the temporary lags due to SUNY New Paltz’s packed network. This may even result in rejection of orders.

“Not everything is on the menu, Oscar’s doesn’t have what type of drink I want on the menu or what toppings I would like for my sandwich,” Van Vu said.

This app is definitely a work in progress. It has the potential to succeed and the ability to fit in any court, but it cannot properly predict interference with orders and requires more specifics to adhere to each location.

“It is all trial and error and we are always looking for improvement, that’s the way of the business world,” Nickens said.

Tapingo shows room for improvement in future updates where bugs are fixed and more options are added. But in a university where 6,000 students need to be fed, impatient people waiting in line may be inevitable.

Being Digital: Students Explore Implications of Technology in Medical World

Thu Oct 9 , 2014
After reading Neil Postman’s “Technopoly,” students in Howard Good’s Being Digital class were inspired to create videos which tied in the author’s theories of modern technology advertisements and the issues surrounding them. Kate Bunster and Francesca Caccavale explore the intrusion of technology into the medical world. Produced by: Kate Bunster and […] 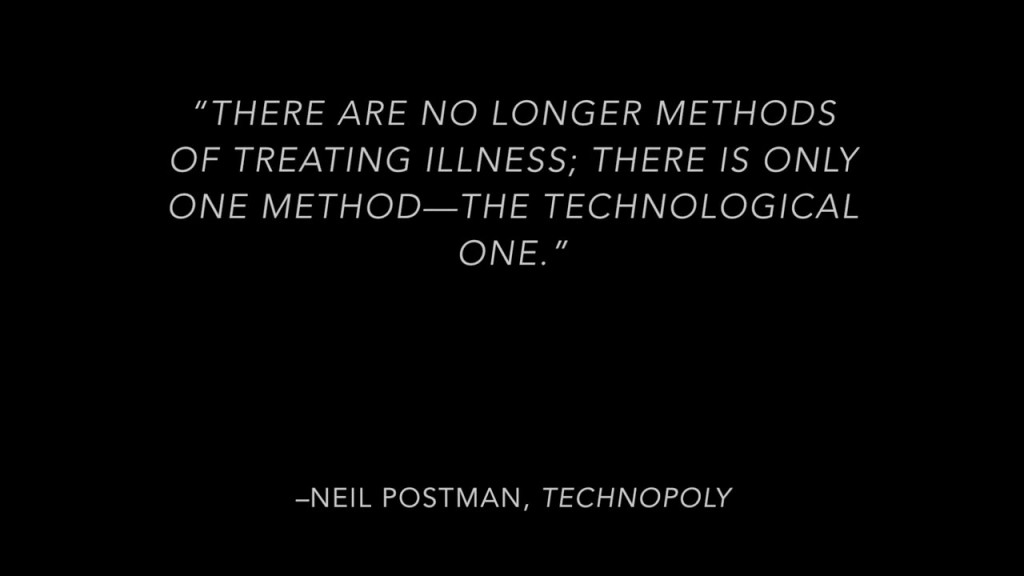