Not Your Normal Commute

Late one November evening Jon Novick made his routine commute home from Brooklyn to Queens after a long day of work. However, as he approached the train that night, a young man aggressively jumped over him and ran away without looking back.

Jon was speechless as groups of bystanders stood there and laughed at what just transpired.

Novick, a SUNY New Paltz alumnus, is a dwarf who moved to New York City last year to study film at Hunter College. He is experiencing a significant difference in the way he is treated, in comparison to his days at New Paltz. Just one example: people taking pictures of him (without even making eye contact).

Jon, who says he’s never experienced more anger in his life than that day, describes the incident as a feeling of complete powerlessness.

“If I were to start screaming at them to get my anger out, then they would laugh. If I chased after them, they would outrun me and laugh. It seemed my only option was to try and keep myself reserved and walk away without giving them the satisfaction of knowing they got the best of me.”

This was the final straw.

When Jon got home that night, he was so disturbed with the actions of the young man and his own inability to take action, he decided to do something.

It was then that Novick considered making a documentary about his experiences.

“My initial concept was to attach some kind of hidden camera to myself, capture all of these interactions and make a short documentary about it,” said Novick.

The project started to come together when one of Novick’s colleagues in the Integrated Media Department at Hunter College notified him of her production company (DCTV), and its mentoring program– LINK– that assists film makers with making content on the subject of disabilities.

Through LINK Novick was able to acquire the wearable camera. What the viewer sees is the world through Jon’s eyes: the pointing, staring and picture taking, along with the abusive and ignorant comments.

“It’s one thing if I talk about these problems, but it’s a whole different feeling for viewers to be able to see them in action,” Novick said.

It wasn’t always like this for Jon. Upon reflection of his time at SUNY New Paltz, Novick describes nothing but positive experiences– a place “full of incredible, accepting people who would never bat an eye at someone who was different.”

However, Novick acknowledges the substantial difference in population at New Paltz in comparison to New York, as a factor that contributes to it it’s less accepting environment

Although some of his experiences in New York City have been painful, had it not been for those experiences, Novick may not have been driven to make the documentary.

After putting the video together and posting it to Facebook on a whim, Jon headed to a film shoot for five days where he had no cell or internet service; no way of seeing the kind of attention the video was receiving (although, he admits he didn’t expect much to come of it)

When Novick returned, he was blown away. The documentary had gone viral through social media websites, Facebook and Reddit.

“…I came back and walked into my apartment when my roommate says, ‘Uhh…Jon? When is the last time you saw your video?’”

In addition to the tremendous number of views on the video, Jon received an overwhelming number of messages from people, not only with dwarfism but other disabilities, sending out positive words on how the video has impacted them, as well as interview requests from various news sources.

The feedback Jon received from his documentary was triumphant– a dialogue had begun. Novick’s work had sparked a larger conversation about the impact actions and words have on people’s lives.

The intent of “Don’t Look Down on Me,” wasn’t to make examples out of the cruelty shown by the people in the documentary. The issue is much greater in Novick’s eyes– one that is fed, according to Novick, by a lack of understanding of what exactly is considered offensive.

Novick offers the following advice to put his message into action:

“If you see someone laughing at someone directly, from a distance or right in their face? intervene. …See someone taking a photo of someone else either who is different or might be temporarily in an embarrassing position that will most likely just be shared on social media? Intervene.”

The documentary concludes with footage of Novick on the train, asking the viewer to consider what someone else’s day might be like, and what part of their day they would want to be. A simple, but compelling message that stays with viewers long after the film has ended.

Thu Sep 18 , 2014
Gov. Andrew Cuomo announced $10 million of funding to expand the engineering program at SUNY New Paltz as part of the NYSUNY 2020 Challenge Grant Program. “We’re grateful to Governor Cuomo for his support of our efforts at SUNY New Paltz to educate more engineering students, support workforce development and […] 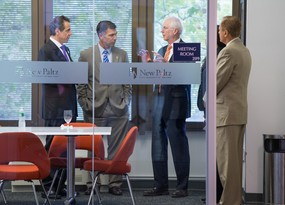