When Danny Klein, a first-year student at SUNY New Paltz, caught a 16-inch fish in the Gunk on Saturday, he couldn’t wait to put it in his cooler and take it home. However, because this was a catch-and-release fishing event, his dream could not become a reality.

“I would’ve taken that guy home, and he would’ve been my dinner tonight,” Klein said.

But maybe it was for the best that he wasn’t Klein’s dinner.

The Gunk, a pond on campus named after the Shawangunk Mountains, is full of garbage, algae and fecal coliform. The biology department monitors the contents of the water every two weeks and has concluded that the fecal coliform is from ducks’ waste and runoff.

Caitlyn Maceli, a student in the biology department, said that she does not think anyone should eat fish from the pond or swim in the pond because of what’s inside of it.

“There is a buoy that we have under water that records all the changes in the levels and regularly tests the water,” Maceli said. “The last time we took it out, it was covered in dirt and smelled really bad, so I wouldn’t want to eat anything that has been sitting in that.”

This was the first time that the college’s intramural department collaborated with the New York State Department of Environmental Conservation (NYSDEC), the biology department and Environmental Health and Safety to plan a free fishing day in the Shawangunk pond. The event was open to the campus and the New Paltz community. Around 40 people came to fish, including students and families.

The winning fish, caught by Klein, was a large-mouth bass. Many of the fish that were caught were anywhere from eight to 12 inches.

There were intramural student employees at the event who measured each fish that was caught and recorded it. The person with the largest fish won a T-shirt.

Erich Stern, a student in the biology department, is in charge of recording concentration levels of pollutants in the pond and comparing them to other lakes in the area, such as Lake Minnewaska.

Stern said that the Shawangunk pond has an average pollutant concentration level of 500, and sometimes goes up to about 1000, which is much more than Lake Minnewaska’s average level of 30.

“The concentration levels of pollutants are very high in this pond, but must not be that bad,” Stern said. “There are still plenty of fish living in here, which doesn’t mean that it’s not dangerous, it just means that it must be OK for living.”

The intramural department and NYSDEC were able to work together and waive the $25 a year fee that normally comes with having a fishing license. This allowed the event to come at no cost. The NYSDEC provided the event with around 40-50 fishing poles and a large container of worms.

“We expected around 30 people to show up,” Ryan Coulter, a worker for the NYSDEC said. “So this definitely went well. Hopefully we can make this a more regular event for the community.”

Mon May 12 , 2014
Lucas Rusinak from Hobie Ramin on Vimeo. Lucas Rusinak is a Third-year organizational communication major from Staten Island. “I started riding right before high school, so I guess its been about 7 years now. Around [the] middle of my junior year of high school, I slowed down a lot because I […] 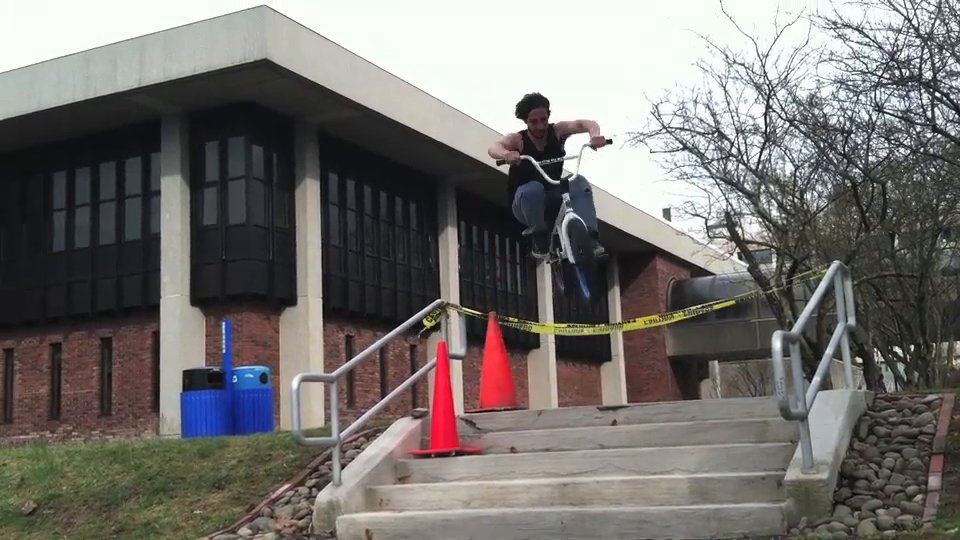