Dorsky Exhibition from The Little Rebellion on Vimeo.

The 80’s are alive and well on the SUNY New Paltz campus, as the Samuel Dorsky Museum showcases the decade in its current exhibition.

With an array of jewelry, photography and prints dating back to the era, the eclectic collection entitled ‘1980s Style: Image and Design’ reviews all aspects of ’80s art, from fashion to photography.
It showcases blunt geometric shapes, powerful colors and a digital revolution, according to the 1980s exhibit’s online feature. The artists took the decade’s troubles into their own hands to create suggestive abstraction and aesthetically provocative artwork.

The goal of 80’s artists was to employ relatively mundane images while using a pattern that harbored substantial content.

According to the museum and exhibition’s curator Daniel Belasco, the selected pieces were chosen due to their significant portrayal of aggression, anger, anxiety and 1980s political developments. No matter the medium of archival, he said, artists working in the 1980s valued using art to face prominent issues including AIDS, nuclear war, advertising and Reaganomics.

These artists used their work to confront pervasive and relevant issues in an edgy way, said Belasco.

Among the pieces featured in the Dorsky’s collection, the most notable include an Andy Warhol screenplay, an untitled George McNeil piece from his ‘The Atelier Project’ and Barbara Kasten’s ‘Construct A + A’ Polaroid print.

“It’s the aggression of the time period that makes these pieces so notable,” Belasco said. “The colors, the styles, everything embodies the emotions of the decade.”

Belasco was appointed the curator for The Dorsky’s exhibitions and programs in 2013 and says that the selected pieces are “arresting” examples of how artists strayed from conventional styles and were “shameless in their expressions of fear” and desire for activism. This, he said, is what makes their artwork a stark contrast to that of today.

According to Rachel Beaudoin, third-year art history major and the museum’s curatorial intern since 2013, each of the pieces of artwork in the exhibit “deal with the sense of fear and anxiety that dominates the 80s.” Some of the pieces are more obvious in their approach than others, she said.

“By selecting works in this manner I think we were really able to create a collection of objects that allow for a new interpretation of how art functioned during this decade,” Beaudoin said. “I hope that visitors are able to grasp a sense of the time period, both aesthetically and emotionally.”

For New Paltz Professor Ann Lovett, whose photography is also featured in the exhibit, the message she hopes viewers take away from her work is to question how information is mediated to the public. This, she says, was an issue anchored in the 1980s that is still pervasive in society today.

As the ’80s are considered one of the most lucrative eras, advertisement to and treatment of consumers is a topical issue expressed in the gallery’s artwork.

Lovett’s work features “20 by 24” Polaroid prints made with a camera available to artists in the 1980s and 1990s through a special access grant program. Her work has also been featured in numerous faculty exhibitions at the Dorsky over the years, including a solo exhibition when the space was still called the College Art Gallery.

Her photography is dedicated an entire wall in the gallery, and features seven popular advertisements of the decade.

For the viewers, Belasco said he hopes they leave with a renewed comprehension of the era. The artwork, he said, really speaks to the issues and emotions encompassing the 80s.

“Artwork is a product of its time,” Beaudoin said. “In all forms, art often responds to the socio-cultural and political realities of the time in which they were created.”

Food Waste By The Numbers

Thu May 1 , 2014
Next time your unfinished egg sandwich and untouched banana gets thrown out in the dining hall, it may get composted and end up enriching the soil in a local garden. But students rarely think about what happens to food they toss out. Efforts to change that are underway, and the […] 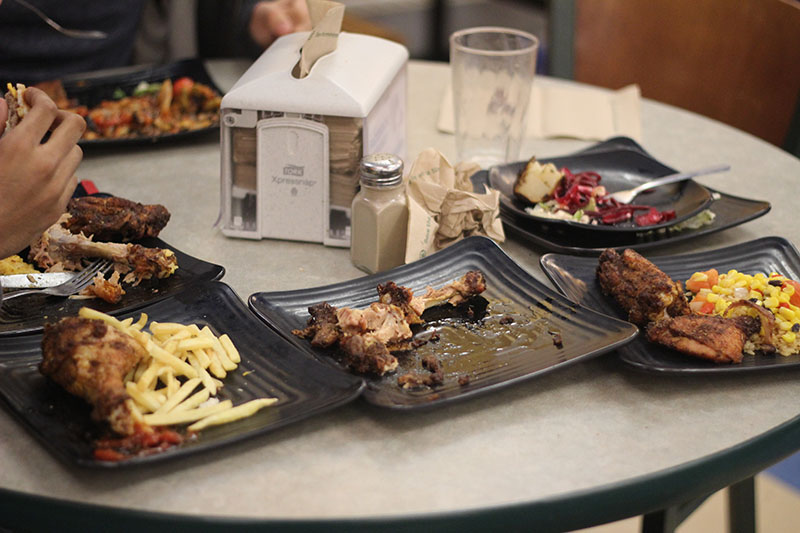