by Richard Moody, the Legislative Gazette

A bill in the state Legislature banning sexual orientation conversion therapy is on the move through the Assembly.

The bill, A.6983-a/S.4917-a, would change state Education Law, prohibiting the practice of the “gay cure” on patients below the age of 18. Both California and New Jersey passed similar laws in the past two years. New Jersey’s law, the most recently passed, was signed by Republican Gov. Chris Christie. The New York bill, sponsored by Assemblywoman Deborah Glick, D-Manhattan and Sen. Brad Hoylman, D-Manhattan, was pushed through the Assembly Higher Education Committee and referred to the Codes Committee last week.

“Nearly every accredited medical institution has agreed that the practice of trying to change a person’s sexual orientation or gender identity is futile and that efforts to do so can cause lasting damage, including depression, social isolation and suicide,” said Nathan Schaefer, executive director of the Empire State Pride Agenda. “This legislation would protect LGBT minors from psychological abuse at the hands of licensed mental health professionals who engage in [conversion therapy] efforts.”

Hoylman, a strong LGBT rights advocate in the Legislature, called some of the methods applied in conversion therapy “barbaric,” and said the practice as a whole does not work. Hoylman said the Southern Poverty Law Center has identified two licensed professionals in New York who practice conversion therapy, but said he believes there are more.

Hoylman said he drafted the bill after he was approached by a constituent who told him as a child an electrode was attached to his testicles and electric shocks were administered as a form of conversion therapy. “He still struggles with it every day,” Hoylman said.

Hoylman said young people struggle with identity and adolescence is a difficult time for those struggling to come to terms with their own sexuality. “As lawmakers it is very important we give them support to figure that out,” Hoylman said.

Even though the bill has not yet moved anywhere in the Senate, Hoylman said the legislation has bipartisan support, including co-sponsorship from two members of the Independent Democratic Conference who share the power to bring the bill to the floor with the Republicans – Senators Tony Avella and David Carlucci. Hoylman notes there is an exception in the bill for religious leaders who perform counseling services.

“Protecting our youth from dangerous conversion efforts helps ensure that young LGBT people will grow up to become healthy and well-adjusted New Yorkers,” Schaefer said. “Passing this bill will send a strong message that it is unacceptable to try to change who we are.”

Sourced from the Legislative Gazette

Wed Apr 23 , 2014
Three goal posts stand at different heights on two ends of a field in the middle of Old Main Quad. A whistle blows and two teams charge from the posts towards a volleyball midfield.  Some are already holding clear, plastic balls as they charge and one stays behind to guard the […] 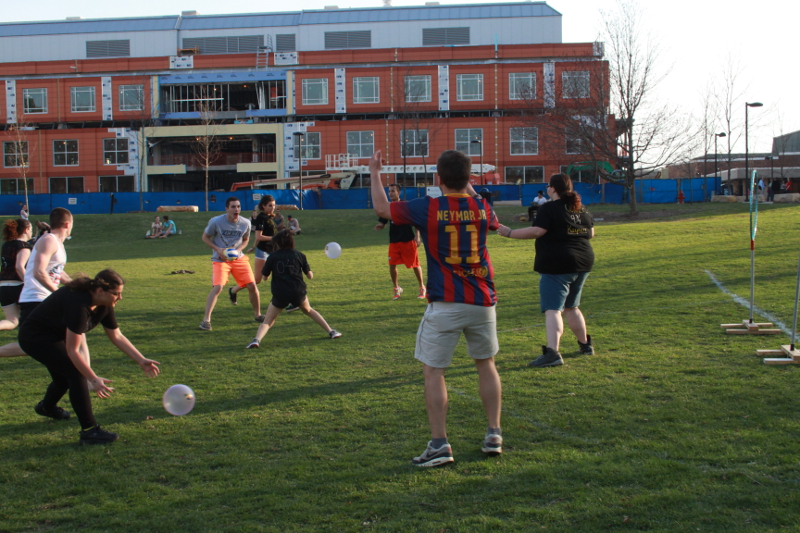