As the state’s closure of four upstate prisons pushes forward, a group dedicated to closing prisons and boosting agriculture upstate is pushing for a bill that encourages state facilities to purchase locally grown products.

The group Milk Not Jails staged a “picnic” on the Million Dollar Staircase in the Capitol on Monday to build support for the Buy from the Backyard Act (S. 978/A.5051) that would require state agencies and institutions with food contracts — such as mental health facilities and SUNY campuses — to purchase at least 20 percent of their food from local farmers.

“Over the last 20 years there’s been a huge boom in building prisons in rural areas and these town see prisons as a way to bolster their economy and make sure their economies stay strong,” Unfortunately prisons are unsustainable, unethical, and incredibly racist institutions . What we are trying to do essentially is create an economic alternative to prisons for theses small rural towns, while working to decrease the amount of folks who are incarcerated in New York state,” said Milk Not Jails organizer Jeff Mathias.

The bill has passed the Senate for the last several years, where it’s sponsored by Sen. Tom Libous, R-Binghamton, but has repeatedly died in the Assembly. Assemblywoman Crystal Peoples-Stokes, D- Buffalo, sponsors it in the Assembly.

Milk Not Jails Founder Lauren Melodia says the project started from the lack of senate support when it came to reforming the criminal justice system.

“We found the biggest feedback that we’d get from them is that a lot of the senators represent districts that have prisons in them and they were concerned that it might lead to job loss,” said Melodia. “So we started reaching out to people in those prison towns and we met a lot of struggling dairy farmers who were also trying to figure out how to survive in the rural economy. We’re really trying to get the state to invest in the agriculture industry.”

“As it is right now, small scale farmers are often struggling. Every 3.5 days a small farm closes down in New York state and that’s simply unacceptable,” Mathias said.

(*Republished with permission from The Legislative Gazette, by Tiffany Brooks)

Will Stoners' Hopes Go Up In Smoke?

Thu Mar 27 , 2014
What is higher, the SUNY New Paltz students or marijuana penalty rates? SUNY New Paltz’s administration won’t budge with their “No Second Chance” marijuana policy and disregards students’ efforts to make its penalties more lenient. The drug policy is one of the most specific and strict in the State […] 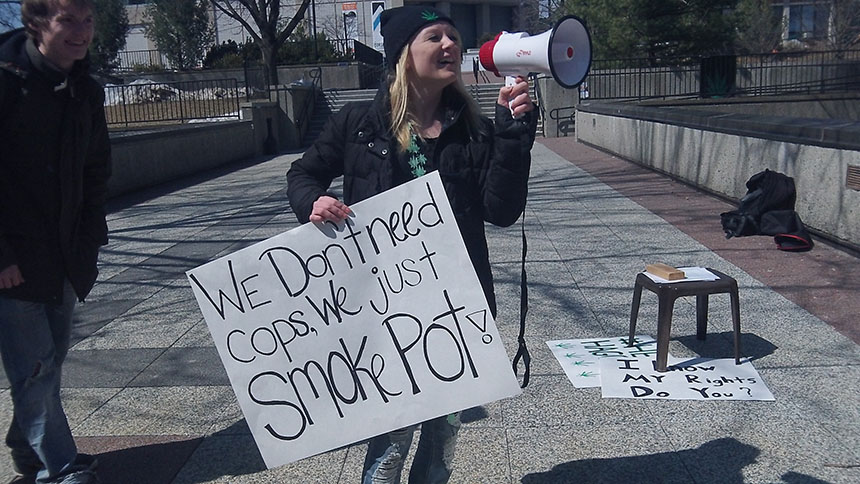