The decrease in parking on the SUNY New Paltz campus due to ongoing construction and the snow has left students frustrated and concerned for their safety. But closer parking is one frustration that will not be getting fixed.

According to the SUNY New Paltz website, the college is in the process of moving parking to the exterior of campus to reduce pedestrian and vehicular conflicts and enhance safety. But some students are not happy about these changes.

The school’s goal is to build upon the presence of the “Gunk,” the pond on campus,  by adding a residence hall near the western entrance, and   removing vehicular circulation through the center of the campus between Hasbrouck Quad and the pond, as well as extending the water along Route 32, according to the SUNY New Paltz Site & Landscape Master Plan. “Each of these changes will make the water a more central element of the campus,” according to the plan.

This more “naturalistic planting strategy”  will discourage the geese, a long standing problem for the campus. The plan states that the water’s edge and the surrounding area will become more attractive to pedestrians.”

Third-year secondary education and English major Ian Belfatto said he does not appreciate the parking lots closing on campus.

“I live in Deyo Hall and usually I’ll park in the Crispell lot, but since they started this construction and closed off half the lot I can barely find a parking spot,” he said. “I think it’s a little ridiculous that I pay $60 a semester for a parking pass, and still have to park on Route 32.”

Christian addressed the parking issue and said there are plenty of spots.

“Inevitably no matter where you are you see parking problems because people want to park right near their building,” Christian said at a February Hot Chocolate with the President student discussion .

According to an interview with The New Paltz Oracle, Director of Facilities, Construction and Design John Shupe said student ticket writers conduct campus lot counts to keep track of the number of empty spaces in lots across the campus. The most recent lot count from last semester revealed that there were often approximately 600 empty spaces in campus lots at any given time, he said to the publication.

Safety concerns in regards to parking is not a new topic at SUNY New Paltz, just one that has been heightened by the construction.

“I mean it’s kind of dangerous in the winter having to cross the street every time I want to get to my car,” Belfatto said.

Fourth-year commuter student, Katherine Speller noted that as a pedestrian, her safety concerns are not comforted by the future planned changes, and that less available close parking increases the risks for drivers to make mistakes.

“Finding parking as a commuter is challenging because everyone is incredibly busy and trying to get to their classes in the same fifteen minute, high-traffic window,” she said. “I don’t want someone rushing to their class to rear end me while I’m trying to scavenge for a parking spot and it becomes a total hunger games grudge match when you’re vying for the same spots.”

Director of Facilities, Construction and Design, John Shupe said that there are several additional safety precautions taken near the parking areas such as additional lighting and security cameras, and the blue light system.

“The blue lights don’t seem to be used very much,” President Christian said.

According to Christian, there have been few blue light calls made, but that the campus is sensitive to lighting and safety issues. Shupe said that in addition to safety in parking lots, Facilities Operations are working on removing snow around the campus as well.

“The snow does impact parking on campus, and our staff has been working around the clock to remove the snow from our parking lots and sidewalks,” Shupe said. “This week we will be sending our crews to student parking lots to help students dig out their cars and clean the parking spaces.”

Thu Mar 13 , 2014
Co-existence with coyotes can get ugly. Coyote Ugly. Coyotes have become accustomed to living among humans in suburbia, frustrating locals with attacks on their pets and livestock. Although coyote attacks have been rare in the past,  recent events have raised concerns about the coyote’s numbers and their habituation with humans. […] 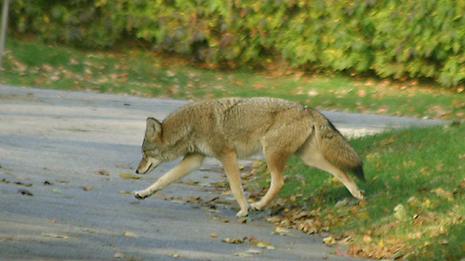