Many teenagers and young adults have become accustomed to hearing their parents, teachers and peers talk about the “real world”—a world teeming with responsibilities, bills, and expectations to “do something” with your life.

In 2012, The Atlantic reported that almost 54 percent of bachelor’s degree-holders under the age of 25 were jobless or underemployed the year before [1]. This is a frightening statistic for many students for whom college is a large investment, with the average debt for students of the class of 2012 coming to $29,400 according to CNN Money [2]. Yet the facts and figures of the real world of jobs and responsibilities often fail to measure another critical component of success—happiness.

SUNY New Paltz alumni Khynna Kuprian, 24, Erik Hill, 23, and Dana Dobryznski, 22, have recently entered into the so-called “real world” and found that while it certainly has it financial difficulties, the biggest challenge is finding a balance between valuing professional success and personal happiness.

Kuprian graduated in May 2013 with a bachelor’s degree in journalism and political science. She worked as a bartender and freelance journalist immediately after graduation, while she searched extensively for a full-time job. She interviewed for a job at a paper in Tennessee, but ultimately didn’t take the job because the starting pay was just over $9 an hour. Kuprian continued to look for employment.

“In August I went on an interview with a small daily paper in southern Vermont,” Kuprian said. “I had to tell her I was going to Europe for two weeks soon after, and I left town thinking I didn’t get the job,” Kuprian said.

Kuprian said she received a call from the editor on her last day in Europe asking her to start in six days. Four months after graduation, she became a full-time reporter for the Bennington Banner in Bennington, VT.

“Studying journalism at New Paltz gave me an understanding of what to expect of working in the newspaper business, and how to prepare for landing a job, but the exhilarating feeling of staying late in the office to reach my daily quota of two stories before deadline, and then seeing those stories in print the next morning, is one I had to experience myself,” Kuprian said.

Kuprian said working professionally taught her “more than I can say about writing, networking, the value of having a thick skin and the love and passion I knew I had for writing and reporting.” However, office politics led to two people quitting—and a large increase in Kuprian’s workload, with no salary increase, despite extremely positive performance reviews from her editors. Others at the office received raises, while Kuprian was stuck doing the work of two people but only getting paid for one.  As a result, Kuprian quit the Bennington Banner after six months.  They hired two people to replace her.

She now works as a bartender five to six nights a week in Middletown, N.Y., which allows her to be financially independent.  Kuprian said she has begun to pay back her student loans and is researching graduate programs. As for journalism, Kuprian said, “I proved to myself I could do it, and well, and for now that’s enough. Being happy is what is important to me. When I decide to use my degree again, it will be when I am one hundred percent sure the job is right for me.”

Happiness is of utmost importance to another May 2013 graduate, Erik Hill.

Hill earned a bachelor’s degree in philosophy with a minor in business administration. After graduation, he worked in the IBM warehouse in Poughkeepsie, N.Y. for about six months, but eventually quit due to the long late-night hours and because he was expected to work certain holidays. Hill said he was able to save up money, but is still looking for jobs “like a mad man.”

While he is motivated to look for a job in order to stay financially afloat, Hill said he is bothered by certain social norms that he feels dictate what people are expected to do after college.

“I have this magical college degree and I’m supposed to find a real job and start a career,” Hill said. “But I still don’t know what I want to do.”

Like so many young people, Hill wants to take some time to travel, figure out who he is, and what exactly he wants to do for the remainder of his life, Hill told the Little Rebellion.“I could easily be applying to entry level sales positions in New York City and move down there and make cold calls all day but that sounds like a cop out to me,” Hill said. “I’d rather find a job that is an end in itself and is something I truly enjoy doing.”

In the meantime, Hill and his band, The Assortment of Crayons, have 15 shows set up from now until May. Hill said playing music for a living is his dream.

“If everyone in the band is down to give it a real shot, I would do that without question,” Hill said.

Yet, Hill is realistic about his music expectations and said he thinks he will eventually go to graduate school.

Another SUNY New Paltz alumnus is caught between real-world expectations and his desire to pursue his dreams.

Dana Dobryznski, whose degree from SUNY New Paltz is still pending due to one unfinished class, left college in December 2013 and now works full-time in the kitchen at the Gilded Otter. However, Dobryznski does not intend to wash dishes and make salads forever—his time at New Paltz inspired him to create his own business.

Dobryznski studied public relations which led him to create Spektrum Entertainment, an event production and promotion company responsible for many electronic music events at Cabaloosa’s in New Paltz.

Dobryznski runs Spektrum with a few other friends, and said that they are working on booking shows in Albany, Oneonta, Syracuse, and Poughkeepsie.

Although Dobryznski is determined to expand Spektrum, he admitted that there are some downsides to being without a college degree and a higher paying job.

“I am currently living paycheck to paycheck to support myself and sometimes that means putting off repairs on my car, being late on rent, being super conservative with food and spending most of my time working or trying to find work,” Dobryznski said. “Even though I do get nervous about the future, I have a great job, am a proud business owner, and am finally able to get into the meat and potatoes of life. There is no greater feeling than knowing that I am now the only person in control of my life and I am on the way to making a career out of what I love to do—rage.”

Thu Feb 27 , 2014
Bryan Lurie from The Little Rebellion on Vimeo. By Andrew Lief Bryan Lurie is currently in his second year as SUNY New Paltz’s head athletic trainer. In this role, Lurie oversees the health of the school’s 13 varsity athletic teams. 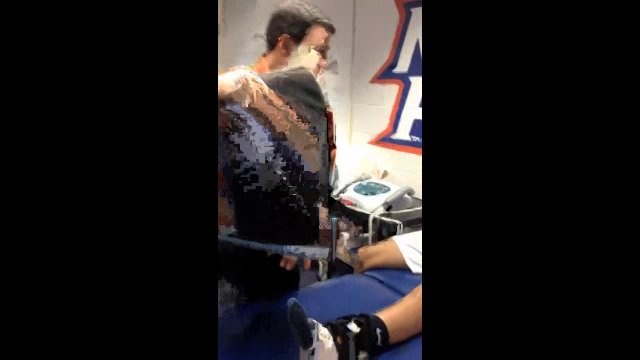