I am ‘other.’ Being an individual with an equally divided ration of two separate identities, I am not alone as “other.” According to a 2010 Census Bureau report, 9 million people reported as identifying as more than one race. As a Colombian and Croatian, I fall into that 3 percent of the United States.

I never thought of myself as one ethnicity over the other but when I filled out college applications or documents, I always found myself at a crossroad.

As a kid fresh out of high school, finding your identity is something of a priority. At that point, college applications aren’t just a ticket out of your home town, but rather something that unconsciously instill a perceived identity. Being half a minority race, the more confusing question was, “How do I see myself?” Since ethnicity/race reflects identity, and my true identity could not be found in those check-boxes, my confidence was somewhat nonexistent.

Although these questionnaires on ethnicity are for statistical purposes I would later find that these check-boxes follow you everywhere. You are always being put in Black, White, Asian, and/or Latino check-box, regardless of any other biological traits you may carry with you throughout your life. When filling out college applications being Hispanic/Latino could mean I have the potential to receive perks, such as scholarships or acceptance to these institutions to fill an invisible quota for “diversity.” Checking White meant I might get thrown into a majority which could spoil my chances at acceptance because I am not “diverse” enough.

The ability to choose multiple boxes only became a choice in 2011 at SUNY New Paltz –something I missed out on when applying here.

Being “other” was my only real choice when applying to colleges. I did not and still do not want to be in one box when multiple apply. It is sacrificing a piece of my identity to sit in a box. The total population of multiracial undergraduates at SUNY New Paltz as of 2012, was 2.2 percent. Which accounts for a total of 141 students who also have similar situations to mine.

I found a lot of the terms used on some formal applications are loaded and can’t possibly show the makeup of diversity. Latino/Hispanic is an ethnicity, not a race, and African American can be anything from Haitian to Jamaican. These groupings based on the color of skin disregard centuries of traditions for cultures. It would be impossible to list every country or ethnicity on these lists but the actual groupings don’t do anything but segregate the population.

Having an identity builds confidence. Learning to use language properly on these forms and giving people the freedom to choose, invites individuals to be more accepting in society.

We shouldn’t be defined as White or Black. Everyone comes from multiple identities and if we didn’t have such definitive lines maybe we could be more understanding and less discriminatory.

Thu May 2 , 2013
I’m used to tokenism. I come from a small town. All throughout elementary school, I was the only person of color in my classes. In the entire school, including my brother and myself, there were about seven of us. I was used to all of my friends being white. It […] 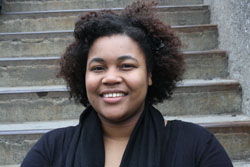