There are two New Paltzs, the town and the village. The village has a mayor, the town, a supervisor. Each has its own planning board and zoning board, they decide who builds what where and how. There are two property tax rates, which, if you’re a student renter, contribute to how much you pay in rent.

There are other differences between the two. While village elections must be non-partisan, the town is currently dominated by the New Paltz Democratic Committee, with Democrats holding all five seats on the town council.

A proposal to merge the town and village governments has dominated the discussion on both boards since December. However, the process has been marred by confusion over budget figures, differing interpretations of the legal language defining consolidation and a lack of communication between elected officials and local residents.

The proposal has been the subject of several lengthy joint board meetings and heated exchanges between proponents and critics of the consolidation plan.

The idea of consolidating the town and village of New Paltz has been discussed since the early 1970s.

Then Village Administrator Robert Remsnyder believed that $50,000 to $100,000 would be saved in the first year of consolidation. He also saw redundancy in each government having separate boards.

The law promises up to $1 million annually to municipalities that are able to consolidate and offer grants in exchange for reducing property taxes.

Seventy percent of the annual funding must be returned to taxpayers in the form of a property tax reduction.

The funding is subject to approval by the New York Department of State and is contingent on funds being set aside for the program in Albany’s annual budget.

According to Town Supervisor Susan Zimet, New Paltz would be eligible for the entire $1 million annual tax credit.

However, Village Mayor Jason West is less hopeful. “No one knows what the criteria are for the million dollars; those are determined by the [New York] Secretary of State,” said West.

According to the Citizen Empowerment Act, the annual tax credit is 15 percent of the total property tax of a merged town and village.

Revenue to local governments dropped by more than $400 million between 2008 and 2012 as a result of the economic crisis, according to the State Comptroller’s office.

Municipalities like New Paltz face the choice of either slashing services or increasing property taxes. Yet New York consistently ranks in the top four for states with the highest property taxes. The median property tax paid in New York is more than double the national median; $3,755 as compared to $1,917, according to the Governor’s office.

During his campaign, Governor Andrew Cuomo pledged to curb rising property tax rates. To do this, his administration has pursued policy initiatives that promote cutting costs at the local level.

The Citizen’s Empowerment Act was intended to reduce property taxes by decreasing the number of local governments by promoting mergers and dissolutions of municipalities.

A New York group made up of local government officials called the Association of Towns opposed it, saying that “there is no substantial proof that consolidation results in lower property taxes.”

The group points out that one of the functions of villages is to assign costs for certain services directly to the people who receive them.

A major issue is how New York funds education and infrastructure by taxing property owners.

This reliance on property taxes has its roots in its Dutch colonial tradition. According to the Office of Real Property Tax Services, the practice dates back as early as 1654.

What was then widely regarded as an equitable way to distribute the tax burden in a municipality has become considerably less so today.

According to a report produced by the Center for Research Regional Education and Outreach (CRREO), 73 percent of the property in New Paltz that could be taxed and used to pay for local services like road maintenance, school costs and police services are untaxed, meaning that fewer property owners share a greater amount of the tax burden.

The majority of the un-taxable property is located in the village, primarily due to SUNY New Paltz’s status as a non-profit state institution.

There is also an imbalance between how much village and town residents pay. According to the same CRREO report, villagers pay 23 percent more property tax than those who live in the town.

One reason for the difference in the tax rate is the greater number of services required by the village because of its higher population density. “In 2009 I was elected on consolidation, and I will continue working towards that,” said village trustee Sally Rhoads.

Both Rhoads and fellow trustee Stewart Glenn ran in 2011 on the “One Community” platform, which was committed to “developing a proposal for a co-terminous village to present to voters,” according to their website.

In 2012, a set of committees began analyzing how consolidation could be implemented in New Paltz.

One committee, made up in part by Rhoads as well as former and current Town Supervisors David Lent and Zimet, focused on the financial impact of consolidation on the town and village budgets.

According to Rhoads, the committee’s job was “not to predict what a future consolidated government’s budget would look like,” but to analyze how a merger would have affected actual 2011 finances.

In its final report, it stated that its objective was to answer the question “Would the taxpayers of both the Town and Village see a difference in taxes paid, if the two governments had been one government in 2011?”

This $1.6 million figure has become a central point of contention between pro-consolidation advocates and their opponents whom Rhoads calls the “antis.”

Critics of the financial committee’s report point to one-time savings that occurred in 2011 as well as budget cuts implemented in 2012 that were included in the “cost savings resulting from consolidation” line of the report.

Mike Russo, a village resident who estimates he’s spent over 40 hours since early January analyzing the committee’s report, said, “the more I look the more questions I have.

At the Jan. 20 finance committee meeting, Zimet explained that some of the cuts made to the 2012-13 town budget were in anticipation of consolidation and may have to be restored if consolidation does not happen. “I can assure you that if we do not consolidate, next year’s budget, we might see people added back to the budget because that assumption is off the table, gone,” said Zimet.

Russo questions the validity of “putting in place a plan that hasn’t yet been approved by voters” and including these figures in the finance committee’s final report. “There was no one saying ‘wait a minute, let’s go back and take a look at this,’” Russo said.

However, Rhoads believes that all of the savings reported by the committee are reflective of the committee’s charge.

“For me, the primary benefit of consolidation is not financial, it’s philosophical,” said Rhoads, who believes that a consolidated Town and Village would allow for a more efficient way to govern New Paltz.

The report completed by a committee looking at the potential of consolidating these boards is inconclusive on the issue of merging the two planning boards.

According to their final report, some members questioned whether a single board would be able to adequately handle the workload of two boards. Others concluded that one Planning Board could effectively serve a consolidated governmental entity.

The joint boards’ plans have focused on a co-terminus town/village that would extend the village boundaries to the current town boundaries.

The new government would function primarily as a village and be governed by a board of trustees. However, the town form of government would still exist to manage things like the volunteer fire department.

Town Supervisor Susan Zimet had hoped that a referendum asking town and village residents to vote on consolidating would take place in March.

However, the timeline has shifted with a November 2013 referendum likely.

The two governments commissioned Fairweather Consulting, a consulting agency that specializes on advising local governments, to study the viability of merging in 2011.

Its report concluded that little to no savings would directly result from consolidation.

This year, Peter Fairweather of Fairweather Consulting reported that with the citizen’s empowerment tax credit in place, there should be no increase in taxes in a consolidated New Paltz.

However, Fairweather also outlined the worst case scenario. If no cost savings are found in a merged government, consolidation could lead to 12 percent increase in town taxes. In the best case, there could be a 5 percent cut to the total budget, no increase in town taxes and between 11 percent and 26 percent tax cut for Village residents.

At a joint board meeting in January, Town Councilmember Jean Galluci expressed uncertainty about the plan. “I can’t say I’m entirely comfortable with that form of government,” said Galluci. “It needs to be more properly explained to me.”

Ultimately, any consolidation proposal must be voted on in a referendum in both the town and village.

The two boards interviewed four firms on April 1 and will select one to draft a final consolidation proposal that residents will ultimately vote on.

Thu Apr 11 , 2013
Show Yourself: Defining RPM (JBE) from SUNY New Paltz on Vimeo. Rap-Poetry-Music, better known as RPM, is a club on the SUNY New Paltz campus where students can express themselves through the power of rap, poetry, music and even dance. This short documentary explores the motivation behind the club through […] 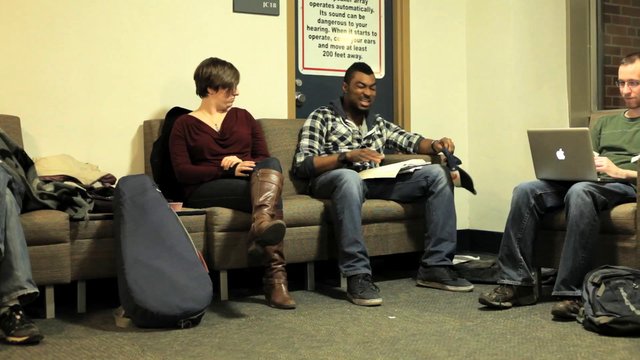