This Spring, there are 161 Turkish students attending SUNY New Paltz- that’s almost three percent of the undergraduate population. They’re studying in the dual diploma program, an academic collaboration where students spend part of their college career at a university in Turkey and another portion in the United States. The commitment is much greater than studying abroad but so is the reward; a degree from two universities in just four years.

The program was brought to New Paltz in 2003 by former New Paltz provost David Lavallee.

According to Kathleen Geher, the program’s director at New Paltz, “Basically there were more qualified Turkish students that wanted to go to universities than places…for them to study.”

As a result, New Paltz along with 10 other SUNY schools reached a memorandum of understanding with the Turkish Higher Education Council (YÖK) to accept Turkish students into their programs. The first group to study came to New Paltz in 2004 and consisted of just six, but by the second year the number had grown to 48.

“At first, it was a three year program,” Geher said. “Students would spend academic years in Turkey and then study here in the summer, which was really effective but they had no down time and it allowed for very little integration with American students.”

Due to these issues, the program was restructured in 2010. Now, the amount of time spent at an American university varies depending on the major. Those studying business and economics attend a school in Turkey for their first year of college. Afterward, they study in New Paltz for their remaining spring semesters and stay for the first summer sessions and then head back to Turkey for the fall semesters. They complete this cycle for three years.

Yesim Uygur is a fourth-year business major from Istanbul Technical University (ITU). She says that the dual diploma program challenges people in a way that staying at one university or even studying abroad does not.

“It requires students to leave their safety zones and friends,” she said. “This is much more challenging because your life is divided between two places for four years.”

Cihan Onal is also a fourth year business major. He and Uygur have been friends since starting at ITU together. Neither had lived on their own before coming to New Paltz. However, they now enjoy the independence and feel at home.

“If I’d stayed in Istanbul everything would still be the same as before,” said Onal. “But I decided to come here and my experiences have grown and my view of life has changed.”

Students from ITU make up the majority of the dual diploma program with 81 in the business program and 64 in the economics program. Although the difference between a city such as Istanbul and a small town like New Paltz is massive, Onal and Uygur say they appreciate the laid back attitude in town. They also feel safe and enjoy being able to walk anywhere at any time.

“In Turkey we don’t have a campus and live far away from each other,” said Uygur. “Here we’re like a community.”

Along with ITU, students studying business also come from Izmir University of Economics, near the coast of the Aegean Sea.

Second-year student, Armagan Fenerci is one of just five students currently studying business in the Izmir program. Making the decision to enroll in the dual diploma program was especially difficult for her because she was the only student in her year to do so. She decided to live on campus because she preferred the safety it offered.

“Interestingly it’s been kind of easy,” she said. “I can adapt to a lot of circumstances. A lot of people have graduated from the program already and it’s a huge advantage so it’s worth it.”

To get into the dual diploma program, students must take an English proficiency test. Although many schools begin teaching English at a young age and many dual diploma students are multilingual, sometimes it’s necessary to enter a program to brush up on English before entering college. Fenerci is among those who had to spend a year at prep school to work on her English before enrolling.

Applying for college is much different in Turkey than what students experience in the United States. The only way to gain access to higher education is by taking the Transition to Higher Education Examination, abbreviated in Turkish as YGS. The exam takes precedence over all grades you receive throughout high school. Based on your score, universities determine whether you are accepted into their programs and what you can study.

Elif Yilmaz is a third-year teaching major from Middle Eastern Technical University (METU), located in Ankara. The first time she took the YGS test, she was offered a spot in a business program in Turkey. This will be her second degree.

“I didn’t want to be left out so I had to pick based on my options,” she said. “I ended up in a program that I didn’t really want to do but I finished it and graduated. I took the exam again and got a much better score which opened up this opportunity.”

Yilmaz is one of 11 students from METU enrolled in Teaching English to Speakers of Other Languages (TESOL) this spring semester. She and the others in the program spend their first two years of college in Turkey followed by a full year studying in New Paltz. They then return to Turkey for their fourth year. For her, it’s a much better fit than what she previously experienced in college.

“The dual diploma program has given me a broader perception,” Yilmaz said. “I’m able to compare the education system in my country to the one here and since I’m going to be a teacher that’s important. I want to learn as much as I can and share what I gain from here.”

Because of the specialized nature of higher education in Turkey, electives are usually not an option. For those in the dual diploma program, it’s not only a chance to immerse themselves in another culture and practice their English, but an opportunity to experience and explore other topics that they may not have been able to otherwise.

Su Basdemir is a third year education major from METU. She says that she has enjoyed experimenting with other types of classes during her time in New Paltz, especially the Live Theater Experience and Philosophy classes. She and her friends also enjoy attending concerts in Studley Theatre and experiencing live music.

According to Geher, there is a consistent enrollment of students in the dual diploma program and she said it has given New Paltz a valuable perspective on other cultures. She said the students she encounters in the program are intelligent, sophisticated, well traveled and often multilingual.

“They’re a great addition to our campus,” she said. “People are learning a lot about Turkey, even myself.”

New Paltz Explores Our Connection to the Eel

Thu Apr 11 , 2013
Every person is connected to the environment through the eel, according to science education specialist Chris Bowser. Bowser addressed the significance of maintaining the eel population in the Hudson River and urged volunteers to assist in the cause to save eels during a lecture on Feb. 14. Bowser, also the […] 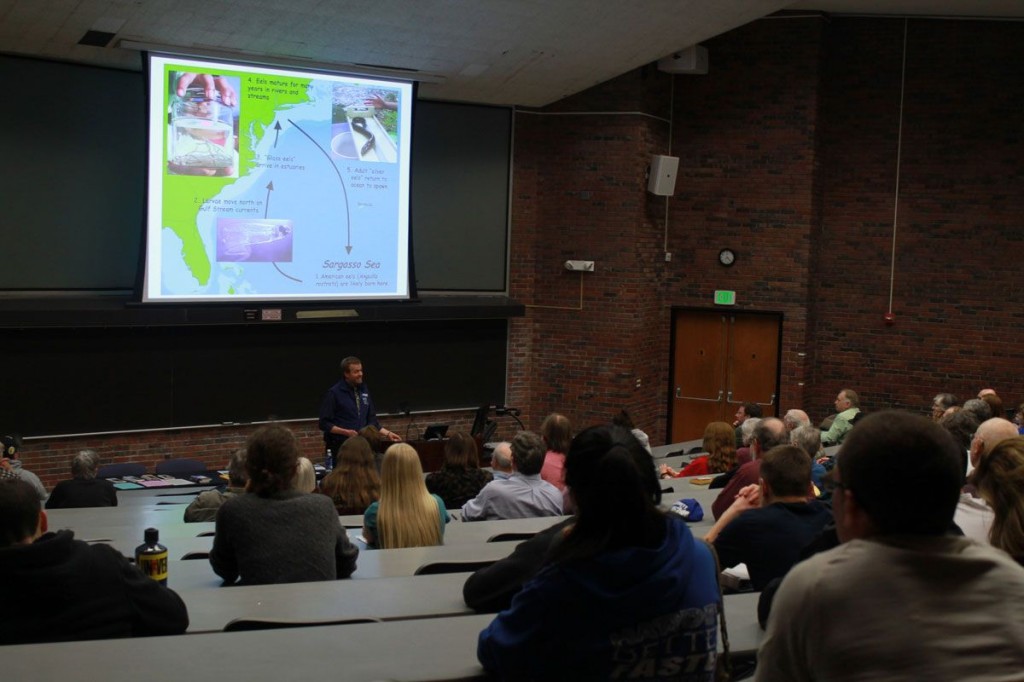