Sandwiched between Suruchi’s Indian Cuisine and Barner Books along Church Street is Crazy Dan’s Secondhand Hardcore and More, New Paltz’s only metal thrift store. Packed with artifacts from metal bands like Thrash Ratchet and dusty cassettes that include “Soul Track—Back to Life Club Mix,” Crazy Dan’s, and its wide selection, has been open a year.

While Crazy Dan’s is mainly a thrift store, the shop also reveals the darker abyss of underground bands and their memorabilia. Lug open the large wooden, red and black front door and you’ll find yourself walking into a nebulous of hanging Metallica posters draped from the ceiling.

A glimpse of the glowing Christmas lights surrounding the small space is caught in the reflection of an orange electric guitar perched in the corner.

Featured inside a glass counter is a green tobacco pipe with marble-like swirls and a Motley Crue band shirt. Sprawled out upon the counter are  flyers for local metal shows, a scene that owner Dan Chiesna supports.

Chiesna opened the metal thrift store as a change from the ordinary gift shops and antique stores in the village of New Paltz.

Typical secondhand stores only accept average, on par clothing. But Crazy Dan’s showcases all sorts of metal band memorabilia with an ongoing range that supports the local scene.

It is safe to say that there is no other shop in town that supplies a collection of 90s Power Ranger figurines along with Ghost Buster tees and a Pee Wee Herman puppet dangling by its shoulder blade above a rack of secondhand flannels and vintage tees. Chiesna’s store is a labyrinth of random objects from other locals’ forms of collateral.

While the potential items of trade have to be of certain value, this policy makes for a unique selection. In exchange for a set of Sega video games, you can walk out with a used Van Halen Tee already worn in by its former owner.
Cassettes from local band Mesa cassettes sit for sale beside a crate filled with 70’s-era classic band’s records. The store reveals a message: Metal has not died.

Thu Mar 14 , 2013
Four members of the Westboro Baptist Church assembled outside the main gate at Vassar College Thursday, Feb. 28 to protest school policy. In return, they faced a sea of counter-protesters so large, the Town of Poughkeepsie Police Department had to close the road and reroute traffic. The Topeka, Kan. based […] 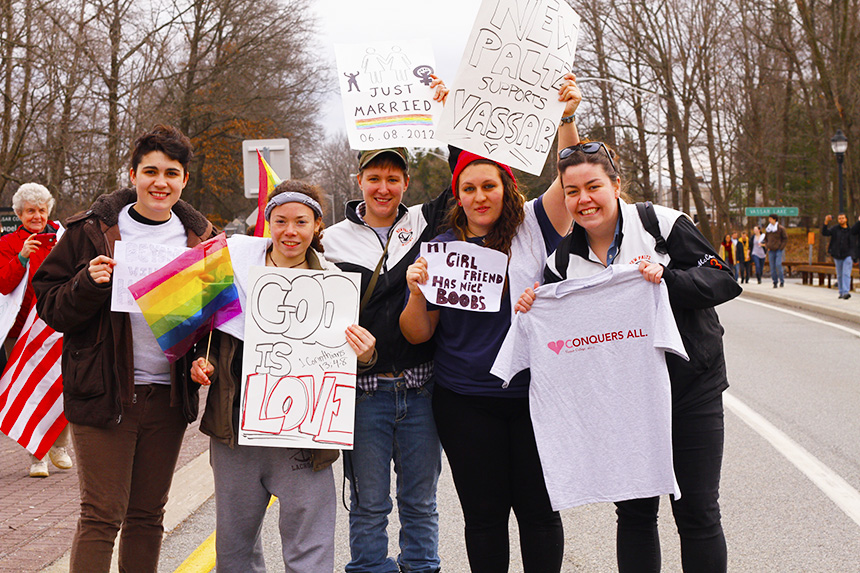