Bre Metcalf-Oshinsky trudged along the snowy path, wincing every few steps. Her brown cowboy boots, though stylish, weren’t exactly cut out for the journey she was on.

“If someone ever does anything this great for me, it’ll make all this worth it,” she said.

No one in Absolut A Capella was quite prepared for the unexpected hike Saturday afternoon of Feb. 16 through the Trapps , a popular rock climbing destination in the Shawangunk Mountains in New Paltz, N.Y.

The group’s president, Natasha Lende, was contacted by a man named Norm Rasmussen, who was organizing one of the most important moments of his life: his marriage proposal. He and his girlfriend, Krista, are both avid rock climbers and hikers, so he wanted to implement that part of their lives into his plan. They would spend a winter morning hiking and climbing through the mountains, before rappelling down the side of the mountain where the musical group would be waiting.

For months, Lende and Rasmussen were in contact, planning the specifics, while the group learned and arranged the couple’s song, “Fix The World Up For You,” by James Morrison.

On the day of the proposal, the group carpooled to the mountain. Unlike many of their performances, they wore their normal clothes instead of themed or matching outfits. Unfortunately, their “normal clothes” were wildly unsuitable for the trek – later renamed “The Trek of Love” by some of the group’s more chipper members.

To reach the proposal spot, they had to walk. And walk. And walk. Uphill, through the snow, with only a vague idea of exactly where they were headed. Their only guide were the texts Lende was receiving from Rasmussen’s friends, who were waiting to guide the group.

The friends, Terrance “TJ” Ciotti, Eric Holmberg and Kait Hearle, had spent the morning planting love notes for the couple and securing their ropes and harnesses at the top of the mountain.

“Well, we’ve talked about it a little,” said Hearle. “I think she knows it’s gonna happen today, but I don’t think she has any idea that all of this is going on.”

The walk was relatively seamless, only interrupted by some flying snowballs and a few cajoling yells for the group to pick up the pace. Then they reached the rock scramble.

With disbelieving eyes, the group collectively looked up at the heaping pile of large, snowy rocks that they were to climb if they were to complete their long-awaited “Trek of Love.”

In their pea coats, sneakers and mittens, the group began the one-by-one ascent, led by Rasmussen’s friends. After some slippery missteps and just-in-time hand grabs, the group had finally reached the top. The same group that had joked and laughed on the walk was now quiet–nervous for their performance. Everyone couldn’t help but wonder, what if she said no?

There was little time to ponder, though. The group had to be ready as soon as the preset ropes started moving. They assembled and waited, not entirely sure when the couple would make their appearance. There were some giggles and pint-sized snowman making, but the singers were generally quiet until one of them pointed up excitedly.

The couple had finally appeared and started descending the mountain. About halfway through the bridge’s “Bah Bah Bahs” and riffs of soloists Stephen Kalogeras and Metcalf-Oshinsky, the couple touched the ground and Krista looking around slightly bewildered. After some rope maneuvering, Norm, whom the group had never seen until that point, dropped to his knee, and asked with a glowing smile,

“Will you marry me?”

The group’s fears instantly vanished with the “yes” that sprang from Krista’s mouth before the couple embraced each other and their new future.

Thu Mar 21 , 2013
SUNY New Paltz seniors, Jonathan Espinosa and Jada Young, held a vigil for the one year anniversary of the death of Trayvon Martin on Feb. 26. Several students gathered outside the Student Union Building and lit candles while they shared stories related to discrimination and injustice. Young performed an African […] 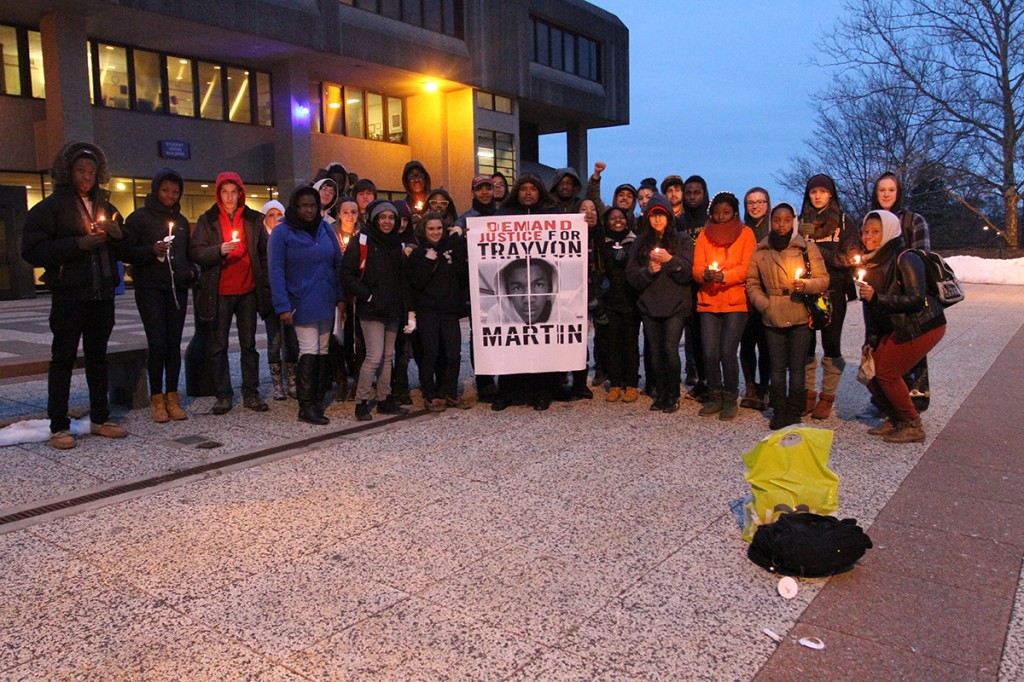