The fourth annual SUNY New Paltz New Play Festival is aiming to create a discussion on women’s issues such as dating, family, choices and relationships through six short plays. Along with an open conversation through art focused on women, the festival is creating opportunities for writers to have their work performed The focus on women for this year’s festival was a conscious decision.
According to English Professor Larry Carr, “Women’s issues are at the forefront — worldwide, regionally, nationally and internationally.”

Robert Miller, artistic director of the festival, sees the festival as an opportunity to create an original, creative production. He also said he thinks the festival is a chance for students to gain experience with acting, producing, and writing original work and allows them to see their efforts come to fruition.
Chelsea Demott, third-year digital media and creative writing major, was approached by Carr to participate for the first time in the festival after he read and revised her piece titled Love-lee Project. Love-lee Project is about a man and a woman who, against their will, end up speed dating. The two are not interested in each other, and end up trying to put their parents together.
There are some twists in the storyline as well. Carr commented that Demott’s piece was ideal for the festival because it “opens up about gender while being very human.” The characters connect with one another and as a result relate to the audience. Not only is the festival providing experience for Demott, but has inspired her as well. “I feel like this is a start for me,” Demott said.
“I’m excited to pursue more things like this and become more involved in play writing.” SUNY New Paltz alumni and former faculty John Bray, currently a professor at the University of Georgia, is contributing to the play festival as well with Green Sound. Green Sound follows the story of the protagonist, Taylor, who wishes to declare his affection to someone special but lacks the words. The inspiration behind this story is personal for Bray.
“As a parent of an autistic child, this is written with admiration for folks who struggle to communicate, but manage to find ways to be heard,” Bray said.

This short play allows Bray to show how people, both male and female, need encouragement. Bray submitted his play in hopes to reconnect with Larry Carr and Robert Miller. The three worked together previously at the Mohonk Mountain Stage Company in New Paltz. Not only is the festival reconnecting Bray with past colleagues, but allowing him to work with student actors, writers, directors, and designers. “Students are incredibly enthusiastic and lack the kind of cynicism that can come with pounding the pavement and bopping your head into closed doors[of the industry],” he said, adding, “Working with students is rejuvenating, and makes me want to write more and more.”

Fri Mar 1 , 2013
The term “minority” has become an oxymoron, recent census data show. Yet people of color are subjected to institutional racism that keeps them at a disadvantage to whites, according to panelists at a recent forum held at SUNY New Paltz. The United University Professions sponsored a forum  held on Feb. 27 that […] 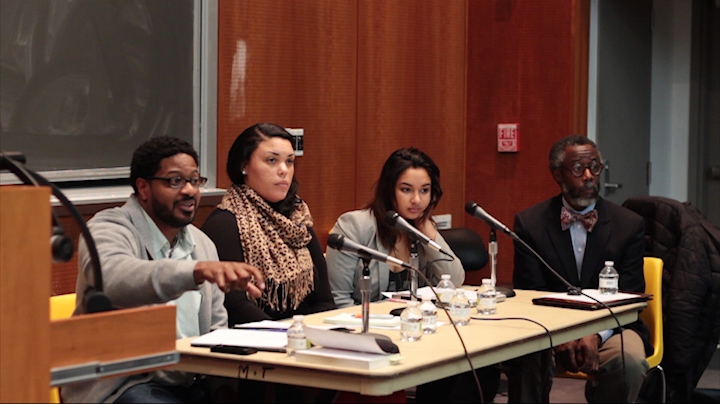