Any list of “impractical college majors” places journalism near the top. Facts are cited about shrinking newsrooms, declining newspaper sales, increasing free news on the Internet and decreasing attention spans.

But the news media is not dead, and neither is the college journalism program.

Journalism is in a renaissance period; moving away from print mediums and into the new digital age, and for the past three years, the New Paltz journalism program has been following suit.

“It is important to assess programs and make changes to update,” said Dr. Howie Good, who served for several years as program coordinator. “If not, we would become outdated.”

The major plan underwent a complete overhaul. The shift made such courses as “Digital Storytelling” and “Entrepreneurial Journalism” required and integrated video editing into the Journalism I classes.

“These classes are teaching students survival skills for the radically changing culture of news,” said Assistant Professor Lisa Phillips. “If we don’t teach our students these skills, it’s a disservice.”

Journalism 1 is the first course any student interested in the journalism major must take.  The class focuses on the core elements of traditional journalism: news gathering, reporting, interviewing and basic news writing skills, but now there’s a greater focus on multimedia production.

Students are required by the department to purchase multimedia tools for Journalism 1, according to current Journalism 1 syllabi. Students need a video camera, flash drive and tripod. The video camera does not have to be traditional though; students are encouraged to use their smart phones.

The videos produced by Journalism 1 students are mainly “man on the street” interviews. These videos last two to three minutes at most, and are currently featured on the program’s online publication The Little Rebellion.com as the ‘Video of the Week”.
In Fall of 2012, there were three sections of Journalism 1 offered, all of which were full at the time of enrollment, according to the schedule of classes. In Spring of 2013, there are two sections of Journalism 1 being offered, one is full, and the other has one available seat.

Digital Storytelling, a core course offered every semester, introduces students to digital media through audio and video production. The class teaches editing through software like Audacity and Avid. Students produce feature-length videos that cover topics like “How I Got To New Paltz”, which chronicles a student’s journey to college, “Extracurricular New Paltz”, which highlights a club or activity, and “My Test”, which is a mini-documentary about a personal challenge a student undertakes.

Students in the program said they feel the skills they are acquiring will help them in their chosen career paths.

“I learned some pretty important technical skills related to framing, lighting and using editing software like Avid,” said Terry Gardner, fourth-year digital production major. “I also learned a good deal about asking the right questions when I’m interviewing someone in order to get the best answers for my documentary.”

Entrepreneurial Journalism, a core class offered during fall semesters, is meant for students nearing graduation. The class is designed to teach students how to develop an independent identity as a journalist.

In the class, students learn about freelance life and write a freelance story, build a web portfolio and obtain a basic understanding of how the skills they have acquired can translate to business.

The class teaches students “real life” skills that are applicable in the changing media culture.

“I’m so happy I took the class. I’d heard a few horror stories going in, so I was a little nervous but if I hadn’t taken it I would have walked completely blind into the freelance world after graduation,” said Jordan Wilkinson, a third-year journalism major.

“Entrepreneurial is the class that shoves money into students’ faces,” Phillips said. “It is an important fact to reckon with. Journalists are no longer shielded from the business side.”

Even classes that are staples in the major are adapting to the new landscape. Copy Editing and Layout was renamed and re-crafted as Multimedia Copy Editing & Layout to teach students how to package stories for the web, and then apply those skills in Advanced Editing/The Little Rebellion, which serves as a newsroom for the website. Traditional classes, like Press in America and Media Ethics, are adding video components to their final projects to keep students video savvy.

According to Good, there is a call in the department to balance cutting edge technology while “recognizing traditions as a firm identity”. Good believes there should be a focus on technology, but students cannot lose sight of core journalism principles like ethics, history and law.

The need for experience is an unchanging tradition in journalism. An internship is required for graduation, and some professors even push students to work at multiple internships.

“You can’t get hired without one,” said Good. “Employers want you wet behind the ears, but not dripping.”

Internships provide an invaluable skill set that goes beyond the classroom, the professors said. Real world work gives students an idea of what to expect when they enter the job market, as well as adding relevance to the skills they are acquiring.

Fourth-year journalism major Brittanie Leigh had a summer internship at Clear Channel Media and Entertainment which led to a part-time position.

“Clear Channel is the number one national radio conglomerate. So interning there gave me the opportunity to build my resume and build a strong network of references, so I could possibly transfer to a Clear Channel anywhere in the country,” she said.

New Paltz students have interned at traditional media outlets, The Legislative Gazette, Poughkeepsie Journal and Chronogram, but have also worked at web-only publications as JSpace.com and The Watershed Post, according to The Career Resource Center.

Students who have completed internships see the long terms benefits of having one.

“It’s taught me how to be a better writer. I think that students can only be taught so much in a classroom, but an internship gives more of a hands on experience with actual deadlines and stories for a real life publication,” said Ricky Hernandez, third-year journalism major.

One final aspect of the Journalism Program that sets it apart from competitors is the Ottaway Seminar. Every spring, students in the department have the opportunity to study with a renowned journalist.

“Students are being exposed to people who embody the best practices of the profession,” Good said.

The professionals that come to the campus bring rigor, perspective, and inspiration to the students, according to Phillips. Some Ottaway professors have written students recommendation letters and even helped a few graduates get jobs.

According to a USA Today article about the future of journalism, it is of the utmost importance to train students to survive in the digital media world. The SUNY New Paltz Journalism program is employing tactics and coursework to help students thrive in ever changing media landscape.

Filling In The Big Picture

Sat Dec 22 , 2012
A new collaboration is making waves at SUNY New Paltz.  The group effort, pioneered by professor Dan Labbato, brings the potential of student talent from the theater, media and English departments to utilize their individual disciplines.  The outcome is student-written, organized, directed, filmed and edited material. The workflow that […] 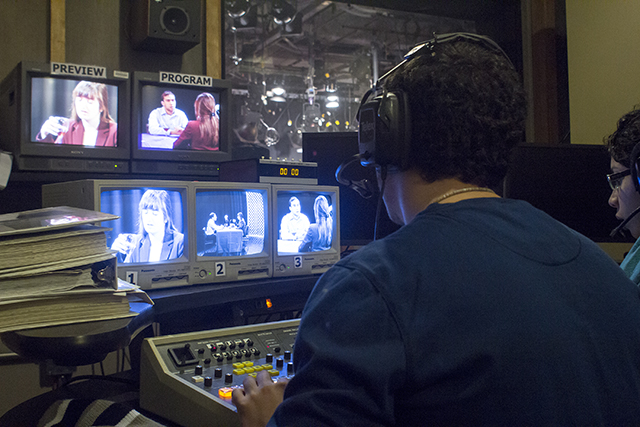