In the aftermath of Superstorm Sandy, feelings of animosity linger toward the corporations and local governments that failed to act and help those in need. As the water recedes and people begin to put their lives back together, there remains a wide spread need for aid.

As the storm came charging up the East Coast, many were aware that a storm was coming. With two storms converging, meteorologists planned for the worst and communities stocked up on food and water in hopes that they would be prepared for the aftermath. However, the region — particularly residents of Long Island and New Jersey — was unprepared for the dark days that would follow the storm–literally.

Sandy left 149 people dead in its wake and destroyed an estimated $50 billion worth of real estate and property including cars and sea-faring vehicles, according to Livescience.com’s analysis of the damage.

On top of the death tolls and other alarming numbers, the residents in some of these areas were without power for over 20 days and some still remain powerless.

Brendan O’Keefe, a fourth-year radio and television production major, is one of the many SUNY New Paltz students affected by the storm.

“I haven’t had a chance to go home yet, but my parents had to find an apartment in the meantime while we renovate. We lost the whole downstairs and both of our cars,” he said.

O’Keefe is a resident of Oceanside, N.Y., and two and a half weeks after the storm, he is still is unsure if his home where he grew up has power.  In terms of preparation, he thinks that there was not enough warning for the residents of Oceanside and surrounding towns like Long Beach, N.Y., which was destroyed.

“We were not prepared. I don’t think there was enough warning and the lack of assistance was just ridiculous,” O’ Keefe said. “The first five days people were joking and calling our town the Land before LIPA (Long Island Power Authority) because of the lack of attention we were receiving.”

LIPA COO Michael Hervey resigned on Nov. 13 amidst a storm of criticism of how the agency handled the relief effort, according to the New York Daily News.

Eddie Hennessy, a fourth-year anthropology major from Howard Beach in Queens, had approximately 6 feet of water in his house. The house is a few blocks from Jamaica Bay and experiences some flooding on the block during high tide, but nothing compared to the 8 feet of water that filled the streets of Howard Beach, he said. His parents and two younger sisters share the home with his grandmother, 84. The lower level of his home where his grandmother lives was destroyed along with both of the families’ cars, he added.

“They already started gutting my house. Luckily my grandma was able to stay with my aunt in Pennsylvania a week before the storm hit and just stayed there to avoid any danger,” Hennessy said. “She is probably going to have to stay there for about six months though.”

Hennessy says that his family was lucky compared to other people in Howard Beach. The surrounding areas had tenants with basement apartments and most vehicles were not at a high enough elevation to survive the water damage.

“Most of my neighborhood had to relocate; some apartment buildings were devastated,” Hennessy said. “It is crazy to say, but I really feel like we were lucky… We came out with everyone in my family in one piece and that’s what matters.”

Not only was private and commercial property destroyed, but a pop culture icon was also lost in the destruction. The tall ship HMS Bounty, a replica of a British Royal Navy ship captained by William Bligh — until it was mutinied in 1789– was built in 1960 and starred in such films as “Mutiny on the Bounty” with Marlon Brando and “Pirates of the Caribbean: Dead Man’s Chest”.

Caroline Budinich, a fourth-year journalism major, went to high school with the son of Robert Hanson, owner of the vessel.

“Late Sunday night it began to sink off the coast of North Carolina and crew members started abandoning the Bounty,” Budinich said. “The captain, Robin [Walbridge] went down with the ship.” The remaining 16 crew members abandoned ship when it was clear it would not be salvaged, according to the HMS Bounty website. One woman was found dead and the captain’s body has yet to be recovered.

The college has created a support system, spearheaded by Dean Linda Eaton, which has been meeting with students and making sure that they are not left helpless by the residual effects of the storm. On Friday Nov. 9, Eaton conducted a meeting with a group of individuals that represented student affairs, various clubs and departments.

“The focus of the group was to gather people who have contact and daily impact with students,” Eaton said. “We want to figure out the best way to get information out that we are willing to help our students.”

Eaton wants students to contact her on an individual basis because the difference in what each student needs is vast. Some may need help commuting or some sort of financial assistance, she said. “The goal is to be personable about what each of our students may need,” Eaton said.

Students with any problems or any setbacks from the storm may contact Dean Eaton in Haggerty Administration Building (HAB) 702 or call her at 845-257-3261.

Additionally, SUNY has partnered with the American Red Cross to aid disaster victims. For help or to volunteer, visit http://www.suny.edu/sandy/

Mon Dec 3 , 2012
This past summer, Brett Cohen walked through the streets of Times Square with an entourage consisting of photographers, bodyguards and a camera crew. With his hair gelled and his shades on, his mission was to prank civilians into believing he was a celebrity—and it worked. Locals and tourists alike claimed […] 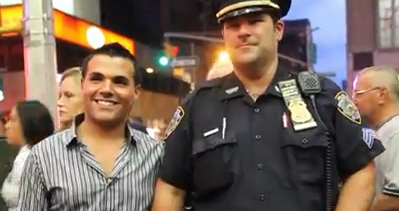