While some people find solace in various religious faiths and look to the heavens for answers, others find comfort in themselves and humanity and collect answers from scientific thought and theories.

Last spring, Kingsbury got the idea to start the Secular Student Alliance (SSA) on campus after attending the Reason Rally in Washington D.C. which was the largest gathering of non-theists, she said. Kingsbury then took her idea to Vogel and the two started the club and became co-presidents.

SSA strives to promote the separation of church and state in a friendly community of free-thinkers, Secular Humanists, Atheists, Agnostics, Skeptics, Naturalists, as well as members of traditional religions, Kingsbury said. She said that the idea of the club is to eliminate society’s notion that non-theist people are immoral because they do not identify with a traditional religion.

“Our goal is to show non-theist people are moral people,” she said. “It is a topic of debate that you can be moral without religion.”

The SSA does community service as a group to show the public that non-theists can gather and do charitable works just as an Evangelical or Catholic Church does, Kingsbury said. She said the group doesn’t do works to show they are moral, but because it is good to help others.

Vogel questions the idea that religion forms an individual’s sense of right and wrong. He said that he believes morality is innate and a result of evolution. Vogel said that if someone kills another human being, they prevent the growth of a species, thus hurting the development of the human race and in that sense, it is wrong.

“Who’s the more moral person,” he said. “The person who needs to be told what is right and wrong by a person or someone who knows?”

Kingsbury said that it is important to note that SSA is not against religions or religious persons, and that the number one rule of the club is respect. She said the main mission of the organization is separation.

“We are not against students organizing on campus,” she said. “It’s the proselytizing by forcing ideas.”

Philosophy Department Chair and Professor Bruce Milem said there is a common thesis known as the Secularization Thesis, which proposes the idea that as a society becomes more modern and scientifically minded, it becomes more secular.  This idea Philosopher Karl Marx and Father of Psychology Sigmund Freud believed in the 19th century, Milem said.

Vogel and Kingsbury both said they have experienced this force on campus that is a state college and therefore should be secular, Kingsbury said.

Vogel said that he was asked by a group of people standing outside the SUB to take a “good person” test to evaluate how much of the Ten Commandments he knew, and Kingsbury said she hears Christian Christmas music playing in the dining hall around the holidays.

“It’s not representative to all groups,” she said. “Fundamentalism is holding us back.”

Milem said in European countries such as France, Germany and Scandinavia, religion isn’t as rooted in society as it still is in the United States. He said religion still remains strong in the U.S. and only recently the polls have shown a rise in Americans claiming to be non-theistic and atheist.

Milem said that modern society leaves many decisions up to the individual as opposed to past theocratic societies like Europe in Medieval times where Christianity was the official religion. Religion is no longer a communal affair. Americans have the freedom of and from religion, he said.

“[America] is more of a supermarket with lots of options,” he said. “We are free to identify.”

Milem said things in the United States are changing, and he said he thinks the creation of the SSA on campus is part of that change. He also said he would like to see tolerance in the nation of people with and without religion, and he said he still sees a place for religion in society, but not where governance is concerned.

“I think [religion] has a place or value for individual people because religions often give answers to pressing questions like ‘why am I here?’ There will always be religious answers,” he said. “My sympathies are more with a secular society where it is up to the individuals rather than trying to impose.”

Vogel said he wants to leave people with the idea that you can be a good person with morals and not have a religion.

“You don’t need religion to live a happy, loving, moral life,” he said.

Saland’s Same-Sex Vote Could Cost Him Another Term

Mon Nov 19 , 2012
Terry Gipson could steal a seat for the Democrats in the 41st Senate District, previously held by Sen. Stephen Saland, R-Poughkeepsie, which could tip the balance of power in the Senate. As of press time, Gipson is leading Saland by approximately 1,600 votes and Neil DiCarlo, who is running on […] 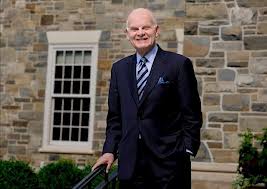