“I usually spend religious holidays with family,” Sebade, who is from Far Rockaway said. “We go to mass and all have dinner together but I haven’t been able to go home for Easter the past two years because we always have school the next day.”

Many college students already find it difficult to spend time with family on holidays. SUNY Stony Brook on Long Island has made it even more problematic with its recent decision to keep the university open for major Christian and Jewish holidays.

Although Stony Brook was the one of only four major SUNY schools to withdraw religious holidays from its academic calendar, students from other schools are worried they will lose these days as well.

Coleen Maher, a third-year at SUNY New Paltz, said the school does not usually close for Good Friday, unless Passover is at the same time.

“The schools aren’t preventing you from attending services, but having to go to class certainly makes it more difficult,” Maher said. “If I have off from school, I attend Good Friday mass.”

Not only did Stony Brook recently end its practice of closing the university for Good Friday, Rosh Hashanah and Yom Kippur, but the new school calendar also scheduled finals on Saturday and Sunday for classes that regularly meet on weekdays.

This will prevent students from enjoying even more of their time off from school.

Meghan Walsh, fourth-year geology major at New Paltz, uses much of her free time to explore nature. While she does not associate with any particular religion, she finds that time off from classes and studying is crucial.

“It is during these extended weekends that I have gone on some of the best hiking trips and learned a lot about our natural world while simultaneously relaxing from the stresses of college life,” Walsh said. “College is about experiencing new things and seeking out adventure. In order to do this, some free time must be available. For those who attend school, have a job and participate in clubs or sports on campus, free time is hard to find.”

Stony Brook’s vice provost, Charles Robbins, says that the new calendar is based on a goal “to increase the level of respect for everybody.”

It will also be consistent and predictable from year to year.

The committee of four administrators worked for a year and a half to provide “as much equal recognition and respect as possible for our diverse campus community that provides maximum instruction for students in the most efficient and effective manner,” Robbins said.

Under the new calendar, spring break will be after the seventh week of class, which according to Robbins, in more logical than tying it to Easter and Passover much later in the semester.

Matthew Leone, 22, a business major at Stony Brook, believes that the calendar committee at Stony Brook knows what they are doing and “if you don’t like it, don’t go to school.”

“Holidays are excuses for people to spend money and take a break,” he said, “but they have almost nothing to do with the religious foundations they sprouted from. Liberal areas like New York aren’t particularly religious unless you consider money a deity and wealthy communion.”

But the calendar changes have angered the Jewish community on the Stony Brook campus, who fear they will be unfairly penalized for missing class on Yom Kippur and Rosh Hashanah.

Rabbi Joseph Topek of Stony Brook’s Interfaith Center said, “there will be a negative effect academically. Those will end up being empty days because a lot of students and faculty will not show up.”

The image of college life in the minds of high school seniors applying to SUNY schools may also be skewed by the recent religious controversy.

Two cousins from Long Island, Stephen Giardelli and Tyler Short, both 17, grew up spending their holidays eating dinner and exchanging gifts with their family, and playing Wiffle ball in their grandparents’ backyard in Selden.

Giardelli, who will attend Suffolk County Community College in the fall, said “it seems as though colleges don’t care about your religion. Spending time with family on holidays has always been a part of my life, but colleges don’t care what you celebrate because they determine your days off no matter what.”

Short, who will be attending SUNY Geneseo, agreed.

“If my future school took these holidays away, I think it would be unsettling,” Short said. “My peers and I have become accustomed to days off on these religious holidays. As an incoming freshman, I think it just highlights the seriousness of college. It is much more challenging than high school and will require a lot of hard work and dedication.”Stonybrook

Are Our Children Learning?

Thu May 10 , 2012
Joel Milian was in his first semester at SUNY New Paltz when he encountered his first obstacle as a college student: his calculus professor.   “He was extremely old and he basically only taught himself,” said Milian, 18. “He would never answer any of our questions.”   Milian is not […] 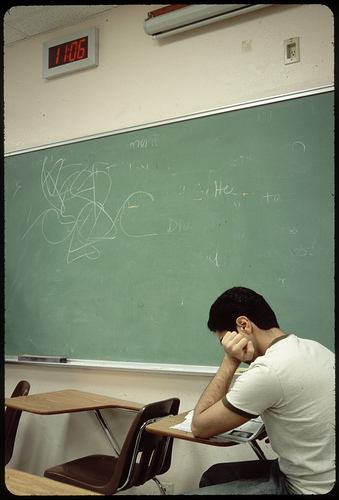