Give me my toy back! I don’t want to eat this! Do I have to go to bed now?  Ever heard those lines while babysitting? Whining is normal for young children who are still developing. It is vocal communication that has evolved over time with children.

The Evolutionary Studies program kicked off its fifth seminar series on Monday, Feb. 6 with a lecture by professor of psychology Rosemarie Sokol Chang. 150 people came to hear Chang speak about her research on the evolutionary origins of whining.

“Whining is a form of love, in a sense, and I think of it as my child loves me,” Chang said.

Chang is a social evolutionary psychologist affiliated with SUNY New Paltz and Southern New Hampshire University. Her primary research interest is in the vocal expression of emotion in attachment relationships. These vocalizations include whines and “loverese,” the baby-talk used between romantic partners.

A mother herself, Chang started this study after curiously searching for answers on why children whine and how easy it gets peoples general attention. “I started this study because no one did whining for children. Children can produce a sound in less than six seconds and I found that very fascinating, intriguing for me to learn more.”

Assistant Professor of Biology Jennifer Waldo noticed the reactions of parents agreeing in the audience. “Her study is very interesting, coming from a parent to other parents,” Waldo said.

In one procedure, Chang sampled a study in how easy whines can distract. She used 10 male and 10 female non-parents with seven male and 10 female parents. Each had to read a story out loud while hearing separately neutral sounds, “motherese” and whining.

Motherese is a slow, high pitched sound children make directed to their mother or caregiver. “It can be portrayed as soothing and loving.” Whines share similar acoustics with motherese.

Chang measured the participants’ heart rates, which were high. The participants were skipping words and rushing through the book to finish so the noise would stop as soon as possible.

Her results showed that whining is equally effective to all sexes, whether a parent or not.

Chang’s theories prove whining is the sincerest form of flattery. “We whine indiscriminately to the people we love, trust and know who will respond.”

Glenn Geher, director of the Evolutionary Studies program, anticipates that students and the general public see Chang’s research as a new revolution in science. “This evolutionary perspective can help us understand something as basic as whining in a whole new light, including an understanding of its function and purpose,” Geher said. 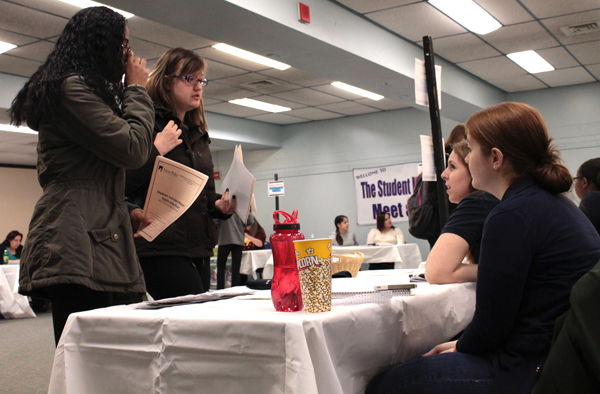