While most students picked up pencils and paper for their final Fall 2011 exams, Professor Lisa Phillip’s Digital Storytelling class picked up video cameras instead. Their goal: take on personal challenges and compellingly document their very real experiences in video. Here are some of their final projects about their personal chronicles:

Darcy Reddan puts himself through a self-imposed media blackout for four days, isolating himself from information concerning the outside world.

Alyssa Klein, a dedicated hip-hop dancer despite her back problems, challenged herself learn ballet, face the pain and trials of a new skill, and go on to perform it in front of an audience.

Josh Rossman survives on just 1000 calories a day and faces preparing for his final semester assignments at the same time.

Joann Syrek, a habitual meat eater, tackles a completely vegetarian and gluten-free diet and not only discovers how difficult it is to maintain her willpower but also the very limited options of a campus diet.

Samantha Taibi confronts her fears of public speaking by participating in a karaoke night at a local bar.

Howard Yew prepares an American thanksgiving to celebrate the holiday with his family for the first time.

Eric Hazucha spends five days as a vegetarian and the difficulty adapting to an alternate lifestyle.

Lauren Reid, not exactly a cook, buys groceries and prepares a dinner party for her friends for the first time, preparing for harsh criticism.

Wed Feb 22 , 2012
New Paltz President Donald P. Christian interviewed Andrew Lehren, the James H. Ottaway Sr. Professor of Journalism on Feb. 8. Lehren began his journalism career as a sports reporter for his local daily newspaper. Now he works as an investigative reporter for the New York Times. He was the lead reporter in the famous release […] 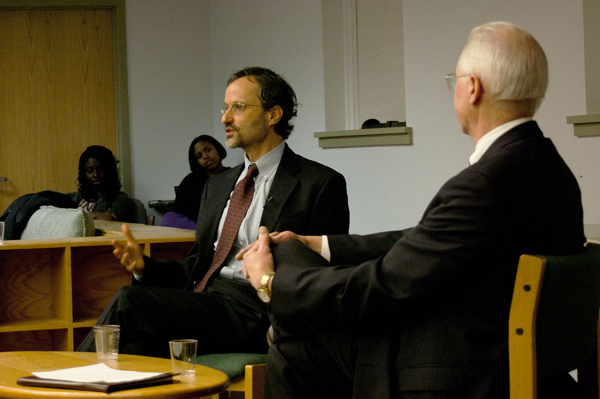