Tattoos are virtually everywhere. On the SUNY New Platz campus and in the rest of the country, they are becoming less of a trend or a fad and more of a way of life.

“I’ve never been very good at expressing myself. Tattoos give me that opportunity,” said Nina Gramaglia, fourth-year political science major. “They’re something that continue to inspire me to live a certain type of life.”

Gramaglia, like many her age, looks at tattoos as things that are here to stay. She views them as a part of life in the 21st century.

“Tattoo culture is not rare any more. Everyone has tattoos,” Gramaglia said. “They can be really beautiful pieces of work and you can’t have preconceived notions about a person just because they have tattoos.”

According to The New York Times, the Food and Drug Administration (FDA) released a report based on an interactive poll in 2003. The report showed that 16 percent of all adults and 36 percent of people age 25 to 29 had at least one tattoo.

Matt Fragner, 22, one of the head tattoo artists at New Paltz’s Art and Soul, said that to him, tattoos are certainly addictive. “As I’ve gotten older I’ve calmed down, but when I was younger there was a point when I would get tattooed five times a week, sometimes more,” Fragner said.

The only problem for some people, Fragner said, is running out of room on their bodies to tattoo.

Despite tattoos playing such a bit part of some people’s lives, most are realistic when it comes to having tattoos in the workplace.

“I know as I’m going into the teaching profession I can’t really have anything too visible,” said second-year art education major and licensed funeral director Cesca Santa. “It was the same thing when I did funeral directing. I had to have everything hidden by my clothes.”

Fragner said many of his customers are very concerned with discretion.

“I tattoo everyone from judges, to cops, to doctors, including this one doctor from Kingston who has a full suit of tattoos that stops at his forearms so it can be covered by his scrubs,” Fragner said.

For some executives, their opinions on the subject are realistic and evolving.

Naadia Burrows, vice president of client services at Broardridge, a financial solutions company based on Long Island, has a simple stance on tattoo: if it’s in good taste, then it’s alright.

“When you’re in college you’re not necessarily thinking about entering into the workforce and other people’s perceptions or biases,” Burrows said. “You really just have to be cautious with tattoos.”

Burrows believes that if it’s meaningful or if the tattoo says something such as “faith” or “hope,” she would probably look at it and make sure it’s “OK,” but she wouldn’t necessarily turn a blind eye to it.

Santa hopes tattoos will become more acceptable in the private and professional worlds. As more people get tattooed, the stigmas will slowly be lifted and the general acceptance for body modification will be raised significantly, he believes.

“Once [our generation] is sort of “in charge” it’s going to be like, ‘OK, so what, you have a few tattoos; it’s not a big deal,’” Santa said. “Just be professional about it and don’t be stupid.”

Still Me, the Difference Between Reality and Human Perceptions

Thu Dec 15 , 2011
Daniel Labbato always had hair at different lengths, but it has never been as short as it is now. After growing his hair and facial hair for 18 months, it took him 15 hours to create 40 different documented haircuts in his project Still Me. Labbato is a SUNY New […] 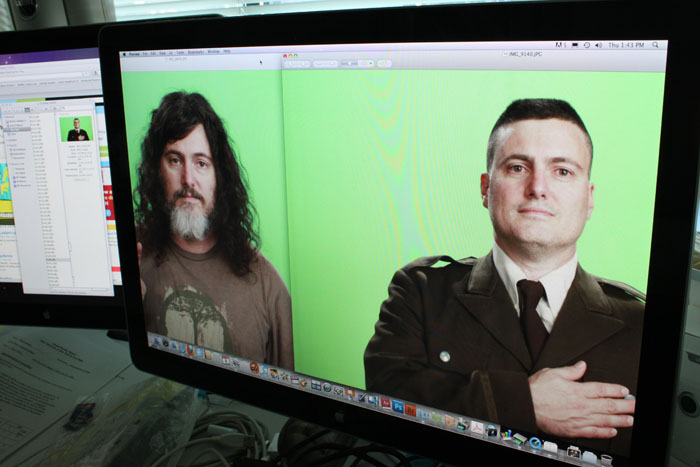