In response to the racist sticker left on a water fountain in Humanities and several acts of prejudice in Lefevre Hall, students at SUNY New Paltz assembled in the Student Union (SU) on Thursday Nov. 17 to discuss the severity of the epithets, and their effects on the campus community.

“Colored Only,” met in SU 100 at 9 p.m. and was open to all students and faculty. This forum was the first of two scheduled discussions announced by SUNY New Paltz President Donald Christian in his second letter to students on Tuesday Nov. 15. The second meeting is Wednesday Nov. 30 at 7 p.m. in the SU Multipurpose Room.

The event was organized by members of the Student Association and the Black Student Union. The forum’s organizers educated the audience on racism and prejudice before opening up the room to students so they could voice their opinions and ask questions about the incidents.

Students and several professors packed the room past capacity with many students crowding the doorway. Attendees sat in a circle around passionate presenters and were asked be tolerant of all comments to prevent any student from feeling intimidated about speaking their mind.

Then, students stood and spoke individually about their personal experiences dealing with prejudice and discrimination in their lives. Yaritza (last names removed to respect privacy, in accordance with the atmosphere of the talk) told the crowd about the day she went to drop her public speaking course. When she asked what she could do better next time, she was advised to get rid of her accent. Erica was on the verge of tears when she spoke about her friend telling her that her dark skin made her “less pretty.” Ronald asked, “What is it going to take for us to do something about this?”

Student Association President and co-organizer of the event Terrell Coakley opened the discussion with his thoughts on the “Coloreds Only” sticker found on the water fountain in the Humanities Building.

“If something like that, of this magnitude, offends an entire group of people on campus, then it should offend us all,” Coakley said. “The fact that we’re all here in the forum says that we are going to do something about it, and not let it keep happening.”

Coakley called the events “tragic.” He said it is unfortunate that racism still exists, but suggested that students use this event to progress and to talk about issues of race no matter how “awkward” it may be.

Jonathan Espinosa, a third-year Black studies and sociology major, told the crowd about his experience finding the sticker on the water fountain and how he refused to let a school employee remove the sticker. He proceeded to point out the sticker to fellow students.

“Even if this is a joke…..it’s still an issue,” said Espinosa. “It still reflects on the racism people feel in [them] every day.”

Members of the audience were asked to participate in an exercise which attempted to bring socio-economical, psychological, and subconscious differences in everyone to light for discussion. The point was to prove the advantages and disadvantages people are given based on the color of their skin, and resulted in students being separated based on their own personal experiences, and then analyzing the makeup of each group.

When a student asked if he was in the wrong for being on one particular side of the room, Coakley intervened.

“The fact that you’re in this program trying to learn how race affects us all makes you a good person,” said Coakley.

Coakley explained that the point of the exercise was to show people how questions about money, education opportunities, and internal feelings was enough to create a ripple that separated most white and black students without any direct questions about race or feelings about a particular race.

“We’re not condemning anybody; we’re educating each other,” he said.

When the floor opened to students and faculty to express their feelings, hands went up across the room.

Communications professor E.J. Persaud was the only professor to address the students at the forum.

“When you take language to say something as a collective, it’s much louder than any single voice,” Persaud said. “Together we will form a voice that will grow on the 30th. The longest journey starts with a single step.”

Jonathan Talmi, a senior sociology major, spoke about injustices he talked about in one of his classes and motivated the crowd to act. “This isn’t a white problem or a black problem, this is a human problem, and just so you know, momentum isn’t progress,” said Talmi.

The event ran about three hours and could not address everyone. The event’s organizers encouraged audience members to attend the next event which will include members of the school’s administration and to bring solutions.

Coakley also encouraged attendees to bring “someone who doesn’t look like you.”

Thu Dec 1 , 2011
The dining services on campus have bought a variety of local food products, from wheat berries to potato knishes, for SUNY New Paltz students. But that’s just not enough for one SUNY New Paltz club. Students for Sustainable Agriculture (SSA) strives to give students healthier options by offering food grown […] 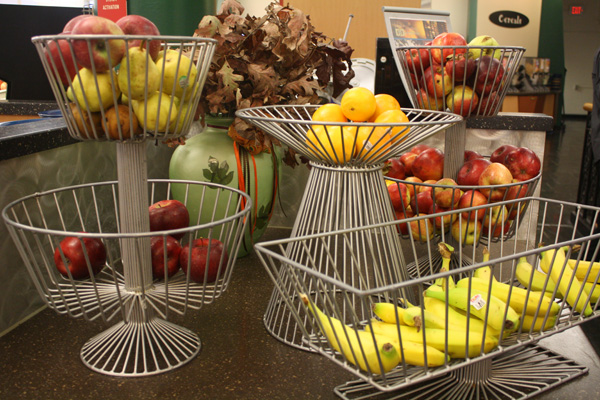