Daniel Labbato always had hair at different lengths, but it has never been as short as it is now. After growing his hair and facial hair for 18 months, it took him 15 hours to create 40 different documented haircuts in his project Still Me.

Labbato is a SUNY New Paltz professor, specializing in film making and video editing. He created an experimental project  investigating the difference between reality and human perceptions of recorded reality, a simulation.

After wanting to do this project for at least 10 years, Labbato finally decided it was the right time. He felt his teaching job created room for an intellectual experiment with a purpose that was accepted within the faculty and community.

Labbato then found a barber who knew how to cut men’s hair in different ways and set up a photo shoot. After each haircut and hairstyle, one after another, a picture would be taken, his hair getting shorter and shorter.

“When you have really long hair, people definitely wonder about you,” said Labbato. “After I cut my hair, I was perceived differently, I came back to school and it really blew people away. It was even harder for me to recognize myself in the mirror.”

Labbato is in the process of working on a website that will showcase his visual experiment. Still Me will portray perception, languages and how it embodies the certain prejudices that occur without one being aware.

Still Me is a take on the still photographs taken of Labbato and he is still himself even though he portrays different personalities and outfits along with the different hair styles.

Labbato set out to disprove individuals who don’t usually think that white males experience discrimination. He said there are many different kinds of levels of discrimination if one doesn’t fit the exact mold society makes of people. These discriminations are assumptions, and we as humans can only perceive the things we think we know about reality, when we really do not know what reality is, he said.

“I’ve always tried to be an individual and I have my own reasons for the things that I do but people do judge you,” said Labbato. “Whether it’s how you dress, or how your hair is, they think they know you when they don’t, so we are all sort of trapped by our own assumptions we make of our perceptions.”

Labbato said  a person perceives things that turn into thoughts and he/she can’t have a thought without using language. He was first against the idea because as an artist, his intuitions and feelings are things done without consciously thinking– they are spontaneous. However, when we have a thought, it is an association with those words, he explained.

“The word isn’t the thing. If I say, ‘he’s a bagman,’ what are the associations with that?” asks Labbato. “He is homeless or he has psychological or social problems. You   make an assumption and your mind starts to fantasize how they got that way.”

Labbato said this is the foundation of how humans work and exist.

“Whether I like that person or whether I am repelled, to me assumptions [are] the basis of how we work and how we live and decide what is wrong and right, good or bad in society,” Labbato said. “However, perception isn’t reality. Reality can exist without us perceiving it.”

Labbato hopes with his experiment humans will be more open-minded and accept that we don’t always really know for sure.

“Is my essence changing because my appearance is changing?” said Labbato. “No, essence is essence. I’m still the same person. I’m still me.”

One thought on “Still Me, the Difference Between Reality and Human Perceptions”

Thu Feb 9 , 2012
The EvoS Program organizes opportunities for faculty and students at New Paltz to develop a deep understanding of evolutionary ideas, conduct cross-disciplinary research using evolution as a synthesizing paradigm, and contribute to novel ideas across disciplines guided by evolutionary reasoning. The program is also funded partly with a grant […] 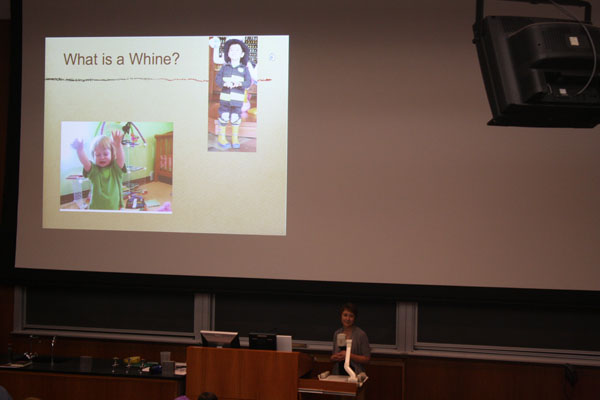