Old Main is now open, with accommodations for not only the environment but students and faculty as well.

The School of Education was relocated during renovations to a variety of locations across campus, with some faculty in the South Classroom Building, the South Faculty Building and the Faculty Office Building.

“Moving was a long and arduous process that forced us to evaluate what we could take with us and what had to be discarded,” Interim Dean for the School of Education Karen Bell said.

Because office spaces in the new locations were smaller, Bell said faculty had to pare down their possessions. She said many of the faculty had to teach in other academic buildings on campus because there were only two classrooms in the South Classroom Building. Bell said that relocation also affected students because many of them who had classes in different locations had to deal with getting across campus in a short amount of time, particularly if their classes were back-to-back.

However, Bell said there were also positive things about being on the south end of the campus.

“Our proximity to the pond provided a tranquil environment. There was also adequate parking,” she said.

As Interim Dean, Bell is responsible for overseeing four academic departments that make up the School of Education: Educational Administration, Educational Studies, Secondary Education and Elementary Education. She also oversees the Center for Academic Development and Learning and the Migrant Education Center.

Bell said, the original condition of Old Main was beyond repair, as there was an old gymnasium and a running track which could not be used because of dried out wood decades old, areas of the building with asbestos that needed removal and spaces of the building infested with mice and bugs.

Old Main was first constructed in 1907-1908 and occupied in 1909. It was originally constructed as an “L-shaped” floor plan, but the 1920 addition of the north wing created the current “U-shaped” floor plan. The north wing added classrooms, offices and the Studley Theater, which hosts events for the School of Fine and Performing Arts. Old Main serves as the primary academic and administrative space for the School of Education.

Bell said that the renovation was absolutely necessary to restore the building to its original “grandeur” and to update classrooms to be reflective of 21st Century approaches to teaching and learning.

“The renovation has made life a lot better,” said Bell.

Bell said that Old Main is significant to the campus of New Paltz because it is the cornerstone of the original campus and has been a landmark for the campus since its dedication in 1909.

“It holds much history and many memories for our alumni,” she said.

Curriculum Materials Center Coordinator Amanda Merritt,, who has been with the college for 20 years, praised Bell for her vision of a place where students could learn in a comfortable environment.

“She made this a very nice place,” said Merritt.

The Curriculum Materials Center, located in old main, still has about 30 to 40 visitors a day and about 100 borrowers, according to Merritt.

“They put these chairs out in the hallways and the next day people were here,” said Merritt, adding that it has not taken students and faculty long to get used to the changes in Old Main. She said that prior to the renovations there were hardly any places for students to sit. Scott Tomik, a first-year childhood education major, said it important that students have a comfortable place where they can focus on academics.

“It’s always quiet here and its comfortable because the people who come here are here for the same reasons you are,” said Tomik. He said that when he does not have all the materials he needs for projects related to his major, he is able to go the Curriculum Materials Center and find them.

“Additional costs above the original budget were encountered due to a number of unforeseen issues encountered or uncovered during the renovation process,” said Smith, who added that these “unforeseen issues” were also the reason why renovations to a “100 year old building” took as long as it did. Renovations to Old Main begin in July 2008, and although the building reopened beginning the Fall 2011 semester, construction is said to be completed by the coming Spring 2012 semester.

“Phase two of the construction, which is the second and third floors of the South Wing and the Studley Theater, is currently finishing up,” said Smith.

One of the great things about this project, according to Smith, is that Old Main is the first Leadership in Energy and Environmental Design (LEED) certified project on campus. According to the U.S Green Building Council, LEED “provides building owners and operators with a framework for identifying and implementing practical and measurable green building design, construction, operations and maintenance solutions.” This is important, says Smith, because buildings are designed to standards that provide energy efficient and sustainable construction and ensures that the long use of the building is contributing to reductions of our carbon footprint, as compared to non-LEED construction standards.

LEED “promotes sustainable building and development practices through a suite of rating systems that recognize projects that implement strategies for better environmental and health performance,” said a statement found on the site.

Religion Reflection: How Does College Affect Your Faith?

Tue Dec 6 , 2011
Some college students continue attending services and stay dedicated to God while attending SUNY New Paltz and feel they are now responsible for their own faith. “It’s a bit harder [to attend services] because my parents aren’t forcing me to go but luckily I’ve been able to push myself,” said fourth-year secondary […] 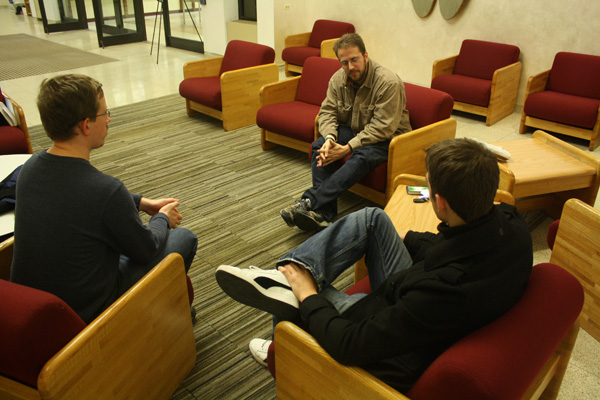