In recent years, the Internet has reached the omnipresent status of a deity— vast numbers of people pay homage to the Internet on a daily basis. They flock to the Internet seeking answers and information. Indeed, the times have certainly changed for the people of the world, and for those seeking information on the film industry, things keep getting better.

Most who are familiar with the Internet and who have a fascination with films have probably heard of the Internet Movie Database. This website serves as a tool to seek various forms of content including celebrity and upcoming movie news, and also a place to review movies providing some user-generated content. It also offers local theater show times, and reviews with brief bios and filmographies for a wide range of people within the film and entertainment industry.

This advertiser-supported website was founded by Col Needham in 1990, long before the Internet took off, and was eventually purchased by Amazon.com later in the decade. Typically, the advertising found on the website is for upcoming movie releases or television series, but sometimes non-related companies like Ikea will find their way in through banners or quick commercials before trailers. Over 20 years since its inception, this site remains to be generally not-for-profit. However, a premium version of this site called IMDB Pro can be purchased for a monthly subscription fee that allows much more information into this industry including casting calls, auditions, and tracking a film’s production. This version can also provide users with a chance to post their resumes and works to gain some recognition.  With the development of the IMDB smart phone application, all of these features can now be easily accessed from anywhere the Internet can be used. Information, entertainment and news can now be found through this one clever and innovative database.

For more Media Mirror reviews, check these out!

Thu Dec 1 , 2011
Cracked.com       It is very hard to find material that is both funny and informative on the Internet.  It seems that you can either read up on the latest news stories or watch mind-numbingly unintelligent Youtube videos, usually involving cats.  However, one website that I have been reading for a […] 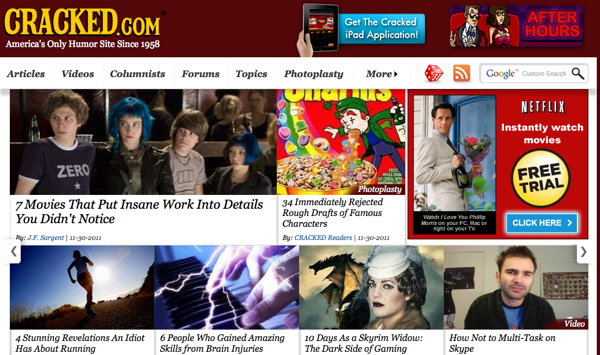