Humans vs. Zombies is a live-action, often week long game played predominately on college campuses. The game was created in Fall 2005 at Goucher College by Chris Reed and Brad Sappington. Since its inception, it has expanded to many colleges across the country. Before the campuswide games of today, Humans vs. Zombies was brought to the SUNY New Paltz campus in Fall 2009 by third-year secondary education major Kenji Kaneshiro. “I heard about it through NERF websites. My friends and I used to fiddle with the [Nerf] guns a lot at home,” said Kaneshiro. It started as a game for Lefevre hall, then it became a campus-wide game. Photo by Jaleesa Baulkman. Humans vs. Zombies is a game where “human” players fight off increasingly large numbers of “zombies.” If a human is tagged by a zombie they turn into a zombie. “It’s like a weeklong game of tag with blasters,” said English graduate student Wyatt Krause. “Part of the fun of the game is the (fact it gets) harder and harder to stays alive.” You can decipher the Humans from the Zombies by how they wear an orange cloth. Humans wear the orange cloth as armbands, while zombies wear it as headbands. Photo by Jaleesa Baulkman. Humans brace themselves for a Zombie ambush in front of Bliss Hall during their second mission. Nov. 12 was the finale of the Humans vs. Zombies game. According to Humans vs. Zombies moderator, Dexter Pabulayan, this is the first year the players were allowed to use their Nerf guns at night because of a (now defeated) campus wide ban on the use of the toy guns after sundown. The police chief allowed them to play after sunset following a series of conversations with the moderators of Human Vs. Zombies. Photo by Jaleesa Baulkman. According to fourth-year radio/TV production student Matthew Ray, each Humans vs. Zombies game has a plot. This storyline was a continuation from the last Human vs. Zombie game. The basic plot was that the humans were recolonizing the campus, and a scientist from the last Humans vs. Zombies game wanted to recreate the zombies. This game is usually played about once a semester, but this semester the game was played twice.  Photo by Jaleesa Baulkman. A week before each Humans Vs. Zombies game, the moderators for the game held meetings explaining the news to prospective participants, said moderator and third-year student Corey Lopez. Matthew Ray, fourth-year radio/TV production major, said it takes about three weeks to plan each Human vs. Zombies game. This year 100 to 125 people participated in the game. Photo by Jaleesa Baulkman. The Zombies celebrate their win in front of Old Main. The Humans were cornered by the steps near Old Main. Photo by Jaleesa Baulkman.

Humans Versus Zombies on PhotoPeach

Old Main Gets a New Look

Thu Dec 1 , 2011
Old Main is now open, with accommodations for not only the environment but students and faculty as well. The School of Education was relocated during renovations to a variety of locations across campus, with some faculty in the South Classroom Building, the South Faculty Building and the Faculty Office Building. […] 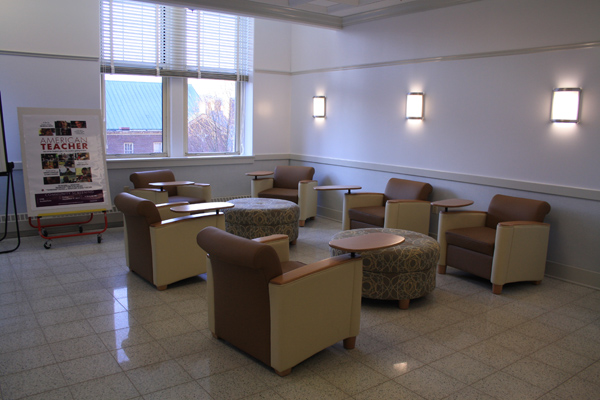