If the Occupy Wall Street (OWS) protests have not annoyed you yet, you aren’t talking to the right people. The protests have attracted flannel-clad hipsters decrying the Tea Party as “fascists,” sociology majors decrying contemporary science as “informed by matrices of Western oppression,” iPhone owners attacking corporate greed while mourning Steve Jobs, and, of course, the vegans.

Yes, I have witnessed all of this.

I visited the OWS protests at Liberty Square feeling gleefully sardonic.  I expected a parade of pretentious 20-somethings and fair-weather “radicals” to provide grist for my contempt: bring on the post-adolescent Matisyahu fans and the aging Trotskyists at Starbucks!

Unfortunately, the protest did not deliver.  A lot of the protestors had good reason to be there and I found myself agreeing with them.  How can I be a hater when there’s nothing to hate?

To be fair, a few members of the OWS crowd did live up to the usual stereotypes. Ellis Roberts, a 25-year-old from Allentown, Pa., staffed a booth spray-painted in the front: “CLASS WAR AHEAD.”

“We’re just glad to see class put back on the map,” grinned the activist from underneath a helmet.

His message sounded downright reasonable – until I saw the paint on the shovel he was holding. “THE WORKERS WILL DIG THE GRAVE OF CAPITALISM,” which was next to a worn, red paperback copy of Das Kapitol. All that was missing was the FOX News crew, ready to pretend that every protestor belonged at this booth.

Too bad it’s totally implausible when only 7.7 percent of private-sector workers belong to unions. Organized labor has been in decline since the 1940s, and the makeup of left-wing demonstrations reflects this. Instead of passing by picket lines and general strikes, I walked by middle class kids complaining about student loans. The loss of labor changed what being on the left means, and that is why the presence of labor unions at the OWS protests is inspiring.

“We’re here to make Verizon the poster child of corporate greed,” says Communications Workers of America representative Nina Coban. Granted, it’s a soundbyte – but Coban does not stick to “PR-speak.”  She jokes, laughs, and praises AT&T. “They have a contract for their workers,” she says.  “Plus they give you unlimited minutes to any other cell phone.”  Verizon, in contrast, only allows unlimited contact within the Verizon network, she says.

The Communications Workers of America (CWA) endorsed Occupy Wall Street last month. These people are not protesting against student loans or some vague notion of “the rich.” They want to see a sane contract with Verizon, a company which tore away employee pensions and forced employees to contribute more toward health insurance premiums back in August.  The ensuing CWA strike against Verizon ended months ago, but the union’s recent endorsement of the OWS protests has members back on the streets.

In other words, OWS has actually resurrected a dead labor strike.  In between the CWA, the Service Employees International Union and even the AFL-CIO, unions are enjoying more mainstream media coverage than they have had in years.

The expected elements are still at the protests, too: drum circles, environmental activists and lots of young people –yet, somehow, Occupy Wall Street is all-inclusive. Guy Fawkes masks signify the presence of Anonymous, an internet activist group which has attacked targets ranging from the Church of Scientology to the Iranian government.

Ellis Roberts and his “comrades” operate their “non-reformist” booth in hopes of revolution.

There is even a roped-off corner at Liberty Square where the children of protestors can play. The American left is known for its division in comparison to the right, but the all-inclusive nature of Occupy Wall Street defies conventional wisdom.

The significant role of labor unions in all of this means the current protests will either be known as the revival of labor’s political power, or as the last gasp of a dying movement. Only time will tell.

Tip of The Iceberg

Thu Nov 3 , 2011
In New Paltz’s Southside Terrace, three musicians cram into a smoky and cluttered bedroom. The space is dark, except for the light coming from a shadeless lamp being blocked by a mammoth upright bass. Pieces of a drum kit are cluttered in a corner of the room with other musical […] 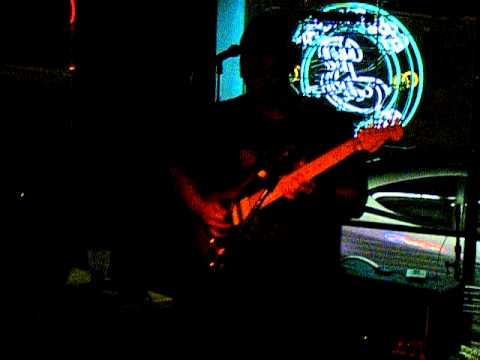