The Lady Hawks have been flying high this past week.

In the span of one week, the SUNY New Paltz Women’s Soccer team secured the No.2 seed in the 2011 SUNYAC Tournament after tying Buffalo State College on Oct. 22, but not before defeating fellow SUNY schools Fredonia and Oneonta in two shutout victories.

The Hawks 1-0 win over Oneonta broke a 23-year-old winless streak against the Red Dragons, while the team’s commanding 2-0 win over SUNY Fredonia tied a program record with 11 single-season victories.

“So far this has been the most successful season I have had here at New Paltz,” Head Coach Colleen Bruley said. “They are the best skilled team we have ever had.”

Third-year goalkeeper Stephanie Vega earned her ninth and tenth shutouts of the season against the two SUNY rivals, which gave her a final of 10 on the season – a New Paltz single-season record.

“It feels amazing knowing I took part in defeating Oneonta after 23 years,” Vega said.  “My team has worked extremely hard to be where we are, and it’s great to know it’s showing and were being recognized.”

With four minutes remaining the in the second half, the Hawks were neck-and-neck with Oneonta until third-year midfielder Beth Bowling, who is second on the team in goals scored, netted the deciding goal.

Fourth-year midfielder Alexa Balestrieri shot a cross to Bowling at the top of the box, allowing her to score her fifth goal of the season.

“It was such a big game for us, and to walk away with the win felt amazing,” Bowling said. “When the goal was scored, the team was so excited. We knew we needed this win, and after scoring, we felt like we were that much closer to securing the game.”

On Friday Oct. 21, the Hawks faced off against SUNY Fredonia. In the first half, first-year student Eleni Anselmi gave a powerful shot to the corner of the net securing the first goal with an assist from third-year student Samantha Abravanel. Before the end of half, fourth-year defender Shannon Cobb took control of the field by securing the second and final goal of the game.

With the win, the Hawks went into their final game of the season against Buffalo State with the chance to be the No. 1 seed in the 2011 SUNYAC Tournament if SUNY Cortland lost to SUNY Oswego.

While Cortland defeated Oswego by a score of 4-0, the Hawks came from two goals down to tie Buffalo state and secure the No. 2 seed heading into the tournament – which will begin for the Hawks on Nov. 2.

Heading into the tournament, the Hawks are confident they will be able to push forward as they prepare to face either SUNY Brockport of SUNY Fredonia next Wednesday.

“Our overall goal from the beginning has been to win SUNYAC’s and that is still our main focus today,” Bowling said. “Our team has worked hard since day one of preseason and there would be nothing more fulfilling then walking away with the SUNYAC championship.”

Thu Oct 27 , 2011
The open space of Cafeteria in New Paltz on Main Street is dim and warmly lit. The mellow atmosphere of the space is enhanced by a young man slowly dancing in front of the Cafeteria audience to a backing-track. It’s Monday which means it’s Open Mic Night at Cafeteria. Sign […] 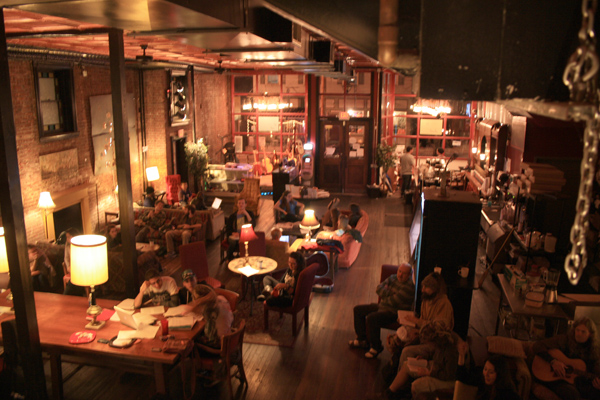