In the wake of the 10-year anniversary of September 11, 2001 many New Paltz residents find themselves reflecting on the tragedy of that day.

“I remember exactly where I was,” said Stephanie Abrams, 23.  “We all went to our advisors and were like what’s going on?” Abrams, a newly hired Resident Director at SUNY New Paltz’s Lefevre hall, was 13 years old when the twin towers fell.

“My first thought was, my sisters go to school in the city, are they okay?”

Luckily Abrams’ sisters were fine, but that was not the case for many families whose fathers or mothers went to work in the World Trade Center or the thousands of firefighters and police officers who responded to the devastation.

“My mom watched the news everyday at 5 p.m. and we would watch clips over and over again of the towers falling and people jumping…it was so surreal. Live footage upsets me to the point of tears even 10 years later.”

Many peoples’ lives changed after 9/11 and Abrams is no exception.

“If anything, I didn’t feel safe anymore…you always walk around and take for granted how safe you feel and you don’t even think about these things happening and instantly that was gone.”

In commemoration of the 10-year anniversary of the national tragedy, three SUNY New Paltz professors created a project to ask the public, “How has it shaped you since then­– for better or for worse?”

In April, they created a corresponding exhibit in the Sojourner Truth Library as part of a conference for the college’s Institution of Disaster Studies and Mental Health. The exhibit, which was reinstated on Sept. 6 and is currently available for viewing, displays several responses from students, faculty and website visitors on the wall of the library lobby. A guestbook is available for library patrons to write in their memories of that day.

“We wanted to get as wide of a variety of stories as we could,” Vermeulen said. “We got more student response than I was expecting… A lot of [students] wrote very thoughtful reflections, which impressed me. It showed that they were influenced by it, and still think about it.”

Vermeulen said that the direction of her own life changed course that day.

“I was living in lower Manhattan. I saw the first plane hit, and my neighborhood was drastically changed. It led me to go back to graduate school, and to become a psychology professor… I wanted to study psychology to understand why that happened. It hasn’t answered those questions yet, but it led to a positive change.”

For the future, Vermeulen said that the next step could be publishing a written work about the project, “but the sort of accumulation of experiences and stories we have now is very powerful.”

The library exhibit will be displayed until Sept. 18. Students can share their stories and read other people’s in the comments section at www.memoriesof9-11.org.

Fear. Confusion. Strangers helping strangers. Where were you on that September day when terror struck the world?

“I was in my 6th grade classroom watching students being picked up by their parents,” says Lomurno.

It wasn’t until her own mother had come for her that she knew something was seriously wrong.

As a resident of New York City, the disaster literally hit home for her. Her mother worked at the South Street Seaport, four and one tenth of a mile from the World Trade Center. Luckily, the event occurred early enough that she had not arrived yet. After Lomurno was picked up from school she remembers seeing the madness in the streets. People were taking all possible routes to “get out.” New Yorkers were traveling across bridges on foot, boarding ferries and sitting in backed up traffic to reach a safe haven.

Lomurno’s father had to travel through the chaos to pick up her stepmother who worked in the city as well.  On his journey he stopped and picked up a stranger in an army uniform in need of a ride. In that moment, this man was no longer a stranger. He was someone’s husband, father, little brother or son.

Lomurno’s friends and family were left unharmed, but the memory of that day leaves an everlasting scar.

This year marks the 10-year anniversary of 9/11 and America is still suffering from the destruction.

“I get really defensive when people talk about it, especially those from other countries,” said Kate Blessing, a fifth-year journalism student and visual arts graduate at SUNY New Paltz.  “They don’t know the area or people that are affected every day from this. Maybe I’m being naive, but I’m not ready for the specials and documentaries. Ten years isn’t long enough.”

Blessing is a 22-year-old New Jersey resident and was in middle school when the attacks took place.

Many other students experienced the same thing and were not aware of the devastation taking place.

Blessing has many friends who have family members that were involved as first responders on that terrible day. She feels that the government is treating volunteers unfairly and making the situation seem less serious. One of the main upsets she has with this topic is that those who have been diagnosed with cancer due to working at the sites are not receiving health care or financial compensation because studies were deemed inconclusive.

“It’s ridiculous; many people can’t work anymore or support themselves just because of the [government’s] bogus claim,” Blessing said.

In honor of all those who suffered, Blessing hopes that one day the country will be able to commemorate the efforts of modern day heroes and acknowledge diversity and tolerance as reasonable and rational goals for daily life.

At first Carlie Benson thought this was just an ordinary day where she happened to be dismissed from school early.

She was attending fourth grade at the time at Lenape Elementary School in New Paltz. She was in the middle of a history lesson, when an announcement was made on the loud speaker. The announcement made it clear that all students were to either be picked up or take the buses home. The teacher did not explain why. The rest of the class and Carlie jumped in the air with bright smiles on their faces.

Carlie’s mother picked her up and the car ride back home was silent. Her mother took her into the living room and tried to explain to her what happened.

“I remember mother explaining to me that the twin towers had collapsed due to an attack,” Benson said. “At my young age, that meant nothing to me.”

Carlie’s mother forced her to stay home for a few days just to be cautious. She still had no idea what happened or what was going to happen.

A few years later around Christmas time, when Carlie was in seventh grade she went down to New York City with a family friend to go shopping and sight-seeing.  After she visited “Toys R’ Us”, her favorite store at the time, she went to visit Ground Zero.

She remembers the area completely cleaned up and empty. At this time, she was told the truth.  As she was reading the names on the billboards of the deceased, she noticed a family to her left. A mother and two kids were all huddled together in tears. Carlie was heartbroken.

At this time, she realized that the day she was dismissed from class in fourth grade, was not worth having a big smile over. That day was not ordinary.

Thu Sep 8 , 2011
Everyone must remember, so we do not repeat the past. This was the sentiment expressed at a panel discussion just a few days before the 10-year anniversary of the September 11, 2001 terrorist attacks. The hijacked airplanes and attacks on the World Trade Center and Pentagon were addressed by four […] 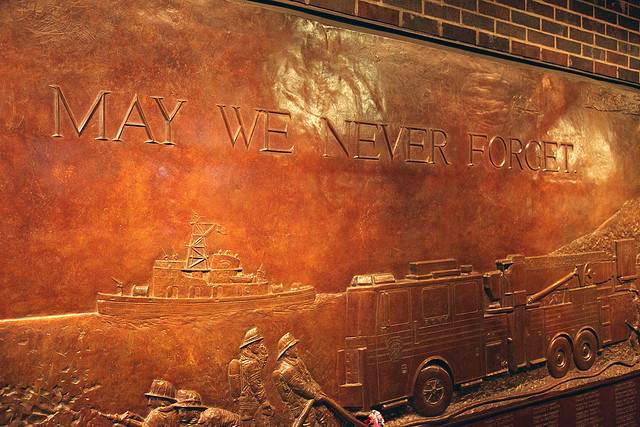