Hurricane Irene swept through New Paltz this weekend and in its wake left the
town in a state of emergency. Besides flooding the Wallkill River – which
crested at 18.9 feet – the storm dumped more than 10 inches of water across the
town, knocking down power lines, flooding basements and even cancelling classes
during SUNY New Paltz’s first week of the semester. Below are testimonials from
students and community members on how they weathered the storm.

“The police came to my dorm room door [Bouton Hall] and told me that my car
was almost submerged in water. I was parked in the [Haggerty Administration
Building] lot and originally thought that my car would be safe in the open space
because I wanted to avoid parking near trees; just in case one fell. I was
better off parking in the Bouton parking lot since that lot is higher up. My car
was not seriously damaged and I was able to move it out of the water. I was just
startled; it’s weird to have the cops knocking on your door.”

“I hung out with friends and drank even though we weren’t supposed to go out
due to the curfew. I think the curfew was probably important because in the
event that the winds did pick up and become dangerous, it keeps people out of
range of falling tree branches and whatnot. Had New Paltz not accordingly prepared everyone and the effects of the hurricane were worse, they would have had hell to pay. So it is good they took the necessary precautions. New Paltz was not as lucky as other areas in terms of damage and safety.”

“I had fun drinking beer by candlelight and the lack of power lightened the mood. It kind
of forced the little group that I was hanging out with to be more intimate.”

“During the hurricane I spent a lot of time screaming out my windows down to people on Main Street – the glory of living here. Other than that, I re-watched a majority of ‘LOST’ on Netflix.”

“The best thing about the hurricane was that it inspired a ‘Lord Of The Rings’ marathon.”

“The most fun thing was staying in for two days with my roommates and waiting for
something epic to happen even though nothing happened. I also realized what a
strong effect the media has on people. I think the media has its own agenda and
should not be taken 100 percent seriously.”

“I left work early and stayed inside for the storm. The next day, I had to
close work early and didn’t get a chance to get food because of the curfew.
That’s about it. Not much fun.”

“It only affected my Friday night – when I was drenched in the rain from walking and my
shoes weren’t dry for a few days.”

“My suitemates and I played the card game Apples to Apples while listening to
records while the power was out. It was great to play games and bond with my
friends.”

Fritz Jacques, a fourth-year accounting and finance major, overlooked his
flooded and powerless apartment in order to hang by the pool with his friends in
the Southside Apartment complex.

“I told my landlord that I’m either showering at his house, or I’m jumping in
the pool. Next thing you know there was a lifeguard,” joked Jacques.

Shannon Fabiano, a second-year undeclared student, spent her days off
hula-hooping in the quad, soaking up the last bit of summer sun.

Harrison Lane, a third-year international relations major, and member of the
varsity soccer team, enjoyed the time off from both his sport and his studies by
venturing out to see the destruction, playing Kan-Jam, and inviting over the
freshmen on his team to bond off the field.

“The freshmen don’t really get to see the rest of the team outside of
practice until the spring. This gave us time to kind of hangout and get to know
them a little better, and vice versa.”

"Where Are You Going, Where Have You Been?:" The United States Since 9/11

Thu Sep 8 , 2011
Sunday marks the tenth anniversary of the September 11, 2001 terrorist attacks. What’s different now? How have we changed? The Little Rebellion explores the past decade with an interactive timeline: The Country Since 9/11 on Dipity. 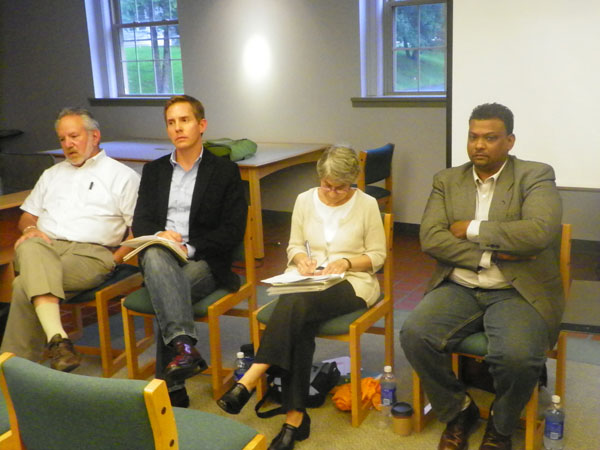