Today, many college graduates have unique talents, and uncommon degrees find themselves lost as they begin their job hunt. They are searching for jobs that no longer exist. To make things worse, the looming fear of student loans haunts every graduate that hopes to find work in a field that our society deems unpractical.

In 2009, Kevin Pignatelli graduated from SUNY Oneonta with a bachelor’s degree in music industry studies. His hope was to move to a large city like New York or Los Angeles to try to get his foot in the door of the music business.

“I thought that when I completed my degree program I would end up moving to a big city and working for a record label or a booking agency,” said Pignatelli, “Given my prior experience and interest, as well as the support the music program staff said they would provide.”

Pignatelli learned that competition for a limited amount of music industry jobs was fierce. Plus, he was facing a tight job market. A Bureau of Labor Statistics report from 2010 showed unemployment for people ages 20-24 was at 14.7 percent, double of what it was in 2007.

Pignatelli moved back to Troy, and like many recent college graduates, he began working outside his field of study to compromise his personal ambitions with practicality.

“I ended up having to work retail mall jobs for over a year,” Pignatelli said. “At first I didn’t mind not working in the music business. I had a part-time job, my bills were getting paid on time and I was burned out from all the stress of my final senior semester.”

During his first year out of college, Pignatelli would skateboard and work out at the gym to keep his mind off his bills. He looked for a full-time job and tried to get health insurance.

“When you are out of work, health insurance is something you don’t have which is huge,” Pignatelli said. “You aren’t able to go to the doctor’s office, dentist or seek any other form of health care, whether it be a routine checkup or an emergency, without paying out of pocket.”

Pignatelli wanted to find a job that interested him. Unfortunately, the music industry was suffering from downsizing and budget cuts. His will to stay positive was waning.

While Pignatelli was working mall retail, he was surprised by an opportunity that would set his career in motion. A close friend from high school asked Kevin to be in charge of managing his hip-hop career. Shane Labounty Jr., also know as Wreck-1, was an up-and-coming rapper who needed insight into the music industry. Pignatelli knew that he was the man for the job.

“It can be tedious work at times for little or no money since as a young artist you often never see money, but it did give me the opportunity to work with artists, producers, venues and other aspects of the music business,” said Pignatelli.

Pignatelli’s love for the industry was rejuvenated, but he still had real concerns about the lack of opportunity.

“After I began to seriously search for a career-job, it seemed like I would never be able to find one in the Albany area,” said Pignatelli. “The biggest fear in my mind was not being able to find a job in the area where I live, and not being able to afford to relocate to a place where there were jobs. That is a real fear that almost any college graduate can relate to.”

With the debt piled up, and without the funds to relocate, Pignatelli was stuck.

“If you don’t find employment after six months, your student loans kick in, and that can be a very scary thing for those of us with a part-time mall job, making barely minimum wage,” said Pignatelli.

However, Pignatelli’s story had an gratifying twist. After a year of searching, Kevin received a call from Trans World Entertainment in Albany. His boss from his college internship recommended him for the job, making good on his promise to help him find a job.

“I am currently a print advertising and marketing coordinator for Trans World Entertainment, the parent company of f.y.e., Suncoast, Sam Goody, Saturday Matinee and several other brands,” said Pignatelli. “Although I was not a marketing major, it is sort of related to my education because they own and operate over 400 retail stores.”

Although Pignatelli doesn’t work with bands, labels, and venues directly, he says he is just happy to be working. A good job is hard to find, and now that he has found his he is holding on tight, he said.

“I don’t think anybody has real job security with today’s economy,” said Pignatelli. “If you look at the work force as a whole everyone from both the public and private sectors are facing increasingly tough times. Our marketing department has shrunk drastically from 10 people or so a few years ago, down to three or four people now.”

Pignatelli said he would rather be in New York or Los Angeles, with a more direct involvement in the music industry, “but given how extremely volatile the music business is, I am lucky to have the job I have.”

A look at Grant+Noren designs, struggling against the backdrop of an economic recession. Sandra Hamlett reports.

A look at Eric Hill, one of many Americans struggling against the current economic recession. Andrew Limbong reports.

Fri May 20 , 2011
The New Paltz Regatta was held on May 1.  The event began with a parade to showcase the homemade boats participating in the race.  Following the parade, attendees enjoyed free music by Snowbear and The Trapps, as well as food, face painting and The Family of New Paltz Duck Race.  The race […] 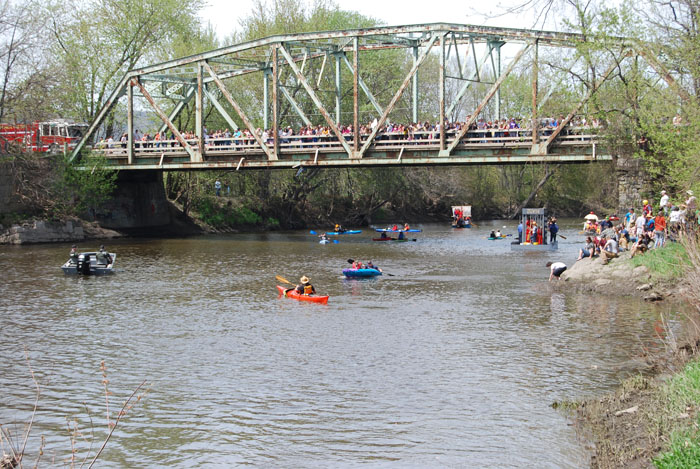