“’The idea that truth is found on a deadline is absurd.  Have some humility!’ Ahahah, man, when you said that…” cackles the over-dressed yet under-shaven intellectual type, quoting from his pocket notebook.

It was so new it practically had the wrapper still clinging to the fake leather.

Quoting a journalism teacher to his face, cliché.  Quoting him from a little reporter’s notebook, automatic A.

The pre-lecture banter about last night’s guest lecturer was spilling over into a full-fledged class discussion. A hot topic amongst the communications department, most professors deemed the impromptu debate more necessary to the growth of the students as journalists than what their syllabus called for.

This professor happened to be a participant in the awkward meeting of minds.

His wrinkles squirmed like a grandfather at Thanksgiving dinner being prodded about his “wilder days.”

Professor Howie Good, his blood red face finally contorting into a Cheshire grin, sat calmly while the reaction poured in from his students about his performance.

Last night, during his “vendetta” as one onlooker described it, he couldn’t sit this still if world peace depended on it.  The noise of his tapping foot was audible in the overcrowded lecture hall, despite being located directly above the boiler room.

The floor was literally shaking, and his nervous tick was more noticeable.

If his foot ever stopped dancing to the rhythm of angst, his fingers would nervously, tirelessly, scribble notes.

The angst, borderline anger, that stews inside Good at all times, boiled over when New York Times columnist Andy Lehrens scoffed at possible public skepticism.

After he delivered the explosive quote mimicked in class by the sport-coat wearing caveman, the ethics debate that Good and the rest of the crowd came for was imminent.

The atmosphere of the talk itself was so palpable, it soon became the story, not Wikileaks.  The dialogue and the conflict were so juicy, my notes turned into a screenplay.  The rest of the scene was so hectic, such a blur of exchanged barbs, backhanded compliments, and full-frontal assaults, countered by condescending, blanket statements on both sides, that a simple reading of my notes is more entertaining than any prose I could use to describe it.

Narrator – a student in the crowd

Good’s questions keep getting shut down.  He wants his ethical debate and Andy is standing his ground.  Good gets desperate and misses with a jab about the New York Times winning Pulitzers while covering up the truth, an implication of their willingness to distort truth.  It is a stretch.

The Negotiator: “ Your words here and work are invaluable, but what about Jordan?  We’re covering Wikileaks and Egypt and Libya, but not Jordan.”

The boiler shut off and the floor stopped shaking at 6:20 p.m., just as the festivities wrapped up.

Stability and order return once the questions go silent.

“I just don’t understand what he came here to talk about if not the ethics behind releasing classified documents…” – half of the class.

“I didn’t know whether to laugh or stick up for him, because he was obviously caught off guard…” – other half of the class.

Who said what is unimportant to Howie.  The fact remains that while Good won, the evils of journalism are no closer to being banished. 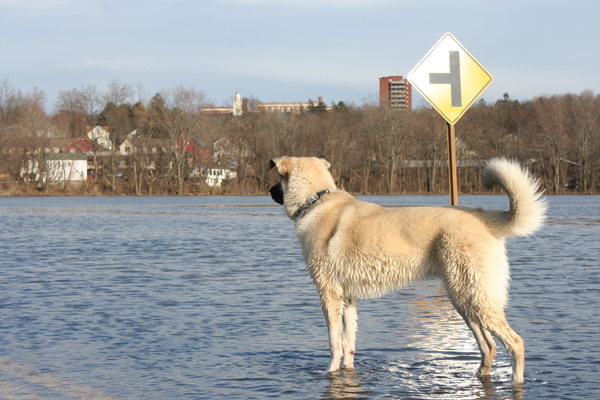