Great storytelling has the ability to motivate people to see the world in deeper, more meaningful ways.

“Powerful storytelling can draw people closer together by helping people recognize others in their own hearts and eyes,” said John Larson, veteran broadcast journalist.

Larson continued the lecture, telling his audience how some national events changed his vision of journalism.

He showed the audience sattelite pictures of Japan, before and after the tsunami hit. According to Larson, such images show the immensity of certain situations; that life can change forever in just a moment.

Egyptian protest photographs kept Larson glued to his iPad each morning. One photograph in particular – of Egyptian protesters holding up pictures of Khaled Siad, a 28-year-old Egyptian brutally murdered by Egyptian police – showed the power of one man’s life, and created a shared recognition between Egyptians.

Larson felt compelled to cover insipid assignments, believing no one else would.

“A storyteller has to give the viewer or reader a sense that they are in the room,” said Larson. “People will not sense the value of a story unless there is something that touches the heart.”

While on assignment, Larson witnessed Iraqi refugees bury their son and the pain it caused them as parents. Here, Larson realized that people all over the world felt the same things. He had seen the same facial expression on the faces of parents whose children were victims of the Columbine High School shooting.  It became clear that people were able to relate to one another through their feelings and experiences.

According to the journalist, each individual has his or her own unique, interesting story. Flying Coach, a Larson creation, is a website that features a collection of stories of people he befriends on airplanes and in airports.

“Everybody is carrying this amazing journey, and all of a sudden, if we start to tap into that, we realize these amazing things that we share,” Larson said.

Larson believes that great stories create a momentum where we start to move closer to each other. We start to see a world where we identify with each other, rather than fear one another.

“The most memorable stories are the ones that illustrate that we are the same,” he said.

Larson left the attentive audience with words of encouragement.

“Fill your hearts, fill your heads with stories worth telling; ones that draw us closer rather than farther apart. They are out there. They connect us and I am convinced they are very real.”

Sat Apr 23 , 2011
Two signs on either side of the door of room 116 declare the room to be the “Digital Fabrication Lab.” On this particular afternoon, a dusty and dirty brick props the door open just a few inches, keeping some air circulating to leave just a hint of the acrid smell. […] 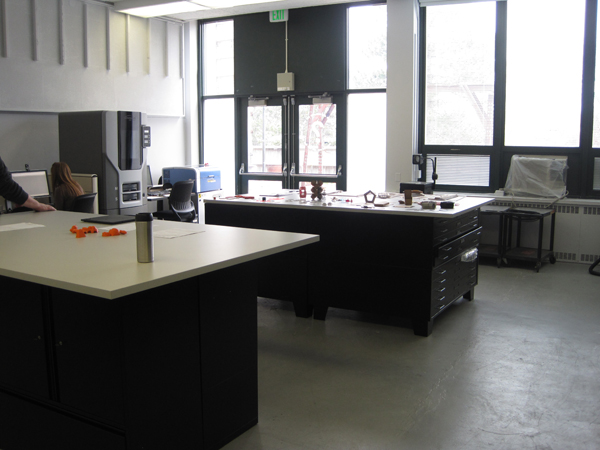