The New Play Festival’s inaugural season premiered on April 8, and continued until April 10.  For the weekend of performances, the audience was brought into a new world of theatre –one where actors are on stage with scripts, wearing basic costumes on a stage absent of props and scenery.

The New Play Festival explores a refreshing new style of performing.  The festival, unlike traditional performances, was “meant to present the words of playwrights in a minimalist style,” Robert Miller said during an introduction to the plays.  The plays were performed in a way intended to display a correlation between the playwright’s words and the actors performing them, reducing the need for stage direction, scenery or props.

Approximately 50 students were involved in the development of the festival as actors, directors, light technicians, set designers and costume designers.  The 11 plays performed were chosen from 70 plays in total, written by playwrights, SUNY New Paltz alumni, a current English major at SUNY New Paltz and independent writers from the Hudson Valley.

On Friday and Saturday, the first part of the New Play Festival was performed in Parker Theatre.  Eight short plays were presented, each about 10 minutes long.

The first part of the New Play Festival began with a performance titled Dating for Dummies.  The play was written by Julie Demers, alumni of SUNY New Paltz. The setting of the play was in a restaurant, consisting of a few stools and stands where the actors wined and dined on invisible wine and bread. Though the scene was without the props and setting that a traditional play would bear, the dialogue between the actors caused a constant laughter in the audience.

Two comical blind dates simultaneously occurred, both couples contributing to the awkwardness of the others date. After many hints and hilarious connections,  it was eventually revealed that the dates had actually been swapped.

The second play, Assumptions, written by third-year English major Annette Storckman, was the only student-made play accepted into the performance.

“It was a little intimidating to be the only student to get in,” she admitted.

Assumptions is the first play Storckman has ever written.  The idea was drawn from her own experiences wearing a bear costume for the local bookstore in town, Mando Books. Within two hours of wearing the costume, she was “flipped off” by other students. Storckman believed this was because students assumed there was a man under the costume, which lead her to develop the idea for her play; a hilarious account of a borderline psychopathic woman who is crazily in love with a bookstore bear mascot, who she later discovers is not a man at all but a woman.

Another short piece premiered, titled Favored Nations.  The play was written by J. Holtham, a former theatre major at SUNY New Paltz. The comedic play was about the complicated relationship formed between two brothers after the reading of their father’s will. The major prop was a treasured bear that becomes the center of the brothers’ fight.

The rare use of props was further demonstrated later in a play titled Black and White and Blue by playwright James Farrell.  The play was centered around a mother from upstate New York who travels to New York City to go through her recently deceased daughter’s belongings with who she thinks is a homosexual friend of her daughter. The mother later finds out that Tony, played by Tony Curtis, was actually her daughter’s lover.  This is revealed through a CD that the couple had released together.

In Baby Shoes, written by Bruce Pileggi, An And is Not a But, written by Craig Sarich, and Last Speckled Catfish by Sybil Rosen, actors sat on stools, strictly focusing on dialogue. When the actors were deep in conversation, they sat straight forward towards the audience, letting the words of the script speak for themselves. These plays had little to no props.

In Last Speckled Catfish the wilderness was heard by wildlife noises lowly coming from overhead speakers and fire was displayed by glowing red lights over head.

Guy on 56th and Lex, by Beverly Brumm, was perhaps one of the most dramatic and elaborate pieces of the first part. The set was a bit more sophisticated than the rest, with a couch and a door.  Nonetheless, the piece displayed not only the power a script can have, but also the drama an actor can bring to the stage. Adam Yellen and Ally Farzetta, current SUNY New Paltz students, acted in the play as a husband (Yellen) who, stressed by trauma in the outside world, goes into psychopathic episodes and a wife (Farzetta) trying to handle it all.

After each performance, a talk-back session was held to give the audience insight to the plays and be able to ask questions.  The actors discussed the difference between these plays in comparison to previous roles they’ve had.

“It’s a lot more flexible and malleable than other performances,” said Rachel Ritacco, a SUNY New Paltz student who acted in five of the eight plays performed.

The actors also discussed how it was a different experience to use scripts and play multiple parts at a time. All of the actors who performed in the first part of the festival played multiple roles in various of the plays featured in the festival.

On Saturday at 4:30 p.m., a reception was held in The Backstage Café to honor the playwrights who contributed to the performance.   Many people involved in the making of this festival were present.

Mary Hafeli, Dean of School of Fine and Performing Arts, said it was particularly interesting to “see a play peeled back, unplugged…see the ideas behind the concepts.” On Saturday at 8 p.m. and Sunday at 2 p.m., the second and final part of the festival premiered, with three plays of longer length. Each, about 30 minutes long, differed in subject but continued with a minimal number of props.

Wheels of Justice, written by Lewis Gardner, was a story of two brothers reunited because of the tragic car accident the younger brother had while drinking, killing two people. The drama in the play was intensified by the setting.  The brothers were sitting on a couch in the middle of a stage barren of anything besides cardboard boxes and papers.  The actors made invisible drinks that they drank out of invisible cups, but allowing the audience to follow the story by embodying the characters and situation.

Andre the Seal, written by Mary Gallagher, was the story of a failed writer and a desperate agent, and a very imaginative screenplay including a performing seal and a young woman almost drowning in a vat of yogurt while on the job.

After intermission, the final play was presented. Calicut, written by Evan Leed, took a more serious tone. On a dimly lit set the plot revolved around a man and a priest lost for two weeks in the African jungle. The two discover a dead body and debate where it is from and what to do with it. The play ends tragically, leaving the festival off on a somber, yet impressive note.

Unlike previous plays seen at SUNY New Paltz, the New Play Festival delivered the messages of the scripts directly through the words of the playwrights, with little focus on stage direction, props and scenery.  The committee involved hopes to host the event again next year. 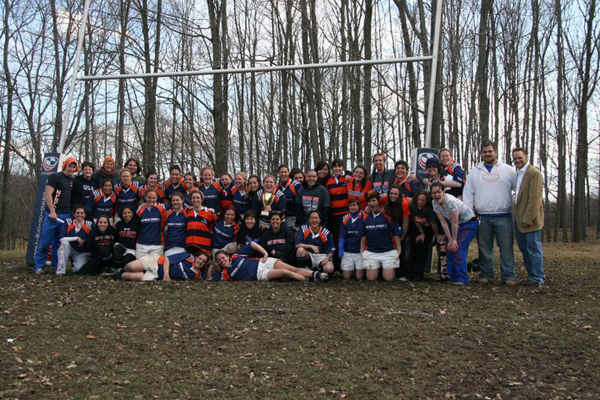