It was a night of larger-than-life sized creatures of mixed media, ambient sounds and experimental music. It was a ‘Monster Party!’ On April 2, 2011, eight local artists came together with a common theme of colossal monsters at the Coffee Shoppe located in Beacon, NY.

“This is a Monster Party,” said Sean McLaughlin, 23, from Poughkeepsie. “It’s a collaborative art project between my friends, showcasing our different styles and cohesively coming together.”

Most associate the word ‘monster’ with bloodcurdling, frightening figures. However, along the rusted red brick wall of this packed Coffee Shoppe, these bold, vivid colored, intricately detailed monsters stylized the unique talent each artist embodies. Artist Dave Beyers, 2008 graduate of SUNY New Paltz, Bachelor of Fine Arts in painting and drawing, created a lot of monsters that were neon, sinister and daunting while playful at the same. This inspired McLaughlin to get together with Beyers and bring other artists, Richard Moebus, Bryan Rusch, Peter LaRose, Libby Tassarini, Alexandra Van Meurs and Kate Kosek to create their own massive monster cutouts.

“We are all similar ages and have similar influences of cartoons, comic books and neon colors,” said Beyers. “I want my viewers to have a sensory experience by looking at the art work, so I try to make the colors vibrate “together to really make your eyes do something they wouldn’t normally do.

Accompanying the eclectic art was the stimulating music. Since 2005, Beyers has been in a one-man band, Boats, that creates noise, video game, ambient experimental music.

“The same way I put colors together to make them vibrate and trip out visually, I want the same thing to happen audibly with my music,” said Beyers. “My listeners are hearing it but also feeling it, it becomes a sensory kind of excursion.”

For artist McLaughlin, inspiration stems from Tibetan Buddhist art, alchemy symbolism and bright cartoon-like, psychedelic substance. Using acrylic paint, pen, paint markers and spray paint, he created a brilliant and vibrant demon, made up of other smaller demons, mutating and “tripping out.”

“It’s basically a demon from the pits of hell of a cereal box,” said McLaughlin.  “I like to play around with duality by presenting evil and gory-ness but doing it in a playful, cute and cartoony way.” McLaughlin is also part of Zillion, a two-person band with friend and fellow Monster Party artist, Peter LaRose. They formed when they were still in high school in 2004. Together, they create ambient experimental rock music, playing at different venues in New York City and the root of their music, their basement shows.

“Basement shows were our first ideal atmosphere for our music, where we could do what we wanted,” said McLaughlin. “With the addition and collaboration of our art, we are moving to bigger and open places.”

For McLaughlin, he wants his audience to know less about what he likes and to have their own interpretation of his art.

“I’m not trying to present one concrete idea,” said McLaughlin. “Art is about your own elucidations.”

However, artist Richard Moebus, fifth year sociology major, wants his audience to specifically see the social message within his piece, “to open their eyes to the surrounding world.”

“I want my audience to see that [my monster] represents people being grounded and the need to see past their immediate surroundings,” said Moebus. “He has no pupils in his eyes, they are frigidly blank. Yet, the brain has eyes in it growing out of his head which shows that he needs to think more to see.”

For these eight artists, this was their first successful collaborative show and prospectively, they look forward in creating a surplus of these monsters and other creatures.

“Working as a team with a bunch of like-minded people really brings the vibe and art to a whole new level,” said Beyers. “In the future, our shows and our monsters are going to get bigger and better.”

Thu Apr 14 , 2011
The New Play Festival’s inaugural season premiered on April 8, and continued until April 10.  For the weekend of performances, the audience was brought into a new world of theatre –one where actors are on stage with scripts, wearing basic costumes on a stage absent of props and scenery. […] 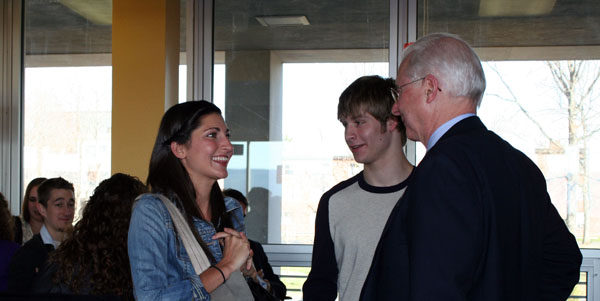