Students interested in a job with the government should have been at Vassar this past Wednesday.  The Mid-Hudson Career Consortium held its first Government/Public Service Career Fair at Vassar College on Wednesday, March 2.  With 18 organizations spread over the military, various federal agencies and local and state governments registered for the event, organizer Susan Smith calls the day a success. “I would love to see this event continue annually so we can build upon these relationships,” she said.

A small liberal arts school, Vassar was chosen to host the event for all the local universities.  For four hours, employers greeted students, shook hands and collected resumes. When the event concluded at 6 p.m., Peace Corps representatives presented a live panel information and discussion session.  The ever-transitioning crowd of approximately 30 people had much to discuss with potential employers.

“These organizations were very honest with me,” said Smith, Vassar’s assistant director of employer relations.  “Some of them are in midst of a hiring freeze, and some just couldn’t fit travel expenses into their budget.”

Students from all over Hudson Valley attended, professionally dressed, ready to mingle and make connections with potential employers. Some employers, though, are simply not hiring.

Unlike some of the agencies represented, the National Credit Union does have openings throughout the country – 20 in the region – according to Gray. He explains that there are none in the immediate area, but if the right candidate is willing to relocate, they are more than happy to take them on and train them for the position.  The closest positions, however, are in places as far as Buffalo and Altoona, Pennsylvania.

“It is helpful though,” Genstch adds.  “I wouldn’t know about places like the FCU (Federal Credit Union). These are some people we didn’t consider.”

Though a few agencies bailed because of financial reasons, some did show up that are currently in a hiring freeze.

“We’re downsizing, losing positions that we’re not replacing,” said Susan Holcomb, a local social security administrator.  “We aren’t hiring, but we were invited and came anyway.”

Holcomb was pleased with the thick stack of résumés she had collected, and explained that all of these are brought to the area office.  When hiring applicants, they will turn to the résumé stack and look them over for candidates.  We hope.

“I’m looking for a new opportunity,” said Troy Johnson, a Mount Saint Mary December graduate.  “I’m trying to get a foot in the door with FBI or Secret Service, and information doesn’t hurt.”  He might have to hold out a bit longer as the FBI is also in a freeze.

Students, agencies and event organizers agree that this is a good opportunity, and looks to be the first of many annual events.

“There is a big push by Obama to make government accessible,” said Gray.  “We would love to come back and do this again.”

Mon Mar 7 , 2011
Dr. Mary A. Papazian, a SUNY New Paltz presidential hopeful, met with students, faculty, and staff on Thursday, Feb. 17, to speak about her experience as an administrator in higher education. Papazian is one of three finalists for the position of SUNY New Paltz president. During the three opportunities scheduled throughout the day, nearly […] 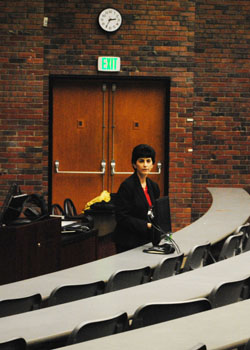