Each move is a message. Each step is a feeling. All eyes in the almost full theater are on the dancers of “Dance Underground” as they perform their first dance of the night. Their dancing is natural and effortless, but the passion behind it shines through as bright as the lights that beat down on them.

“Dance Underground” is a student-run collaboration performance between dance choreographers, dancers and designers.

The New Paltz Dance Association wanted to model “Dance Underground” after “Fresh Dance” – a dance collaboration that occurred at SUNY New Paltz for the last 10 years.

“Fresh Dance” came to a sudden end when the director Yoav Kaddar had to resign from his position due to unforeseen circumstances.

Simone Bart, a third-year theater major who has been dancing for 17 years, stepped up as director. Bart began preparing for the event a year ago.

“I wanted ‘Dance Underground’ to be like ‘Fresh Dance’,” said Bart, “I knew we had big shoes to fill.”

To complement the variety of dance, the Dance Association wanted to include dancers from all over campus, not just theater majors, said Bart.

Choreographers chose the dancers they wanted at general auditions, and were responsible for running their own practices. Bart oversaw the entire production, and was very impressed with the dancers.

“When I wasn’t dancing, I would watch from the wings,” said Bart, “Everyone made me so proud.” Still The New Paltz Dance Association had their doubts before the big night.

“We definitely had a lot of concerns if we were going to be able to pull it off,” said Jena Goldberg, a second-year theater arts major and assistant stage manager for “Dance Underground.”

But by the second number, “Passion into the Night,” the crowd was standing up from their seats and cheering.

“I have been continually impressed by the tremendous skill they possess and their level of commitment to the craft,” said “Dance Underground” advisor Toni Llanos about the dancers.

Bart’s expectations were also surpassed. There were people sitting in the aisles down to the front of the house, she said.

The night took an emotional twist with the arrival of the last two numbers. As dancers danced to “For Scott,” Bart saw choreographer Brittany Pierre crying.

“Throughout the process, you’re constantly moving forward,” said Bart. “You don’t stop to think about it, but when you see it finally come together, it is a powerful and overwhelming feeling.”

The last number was a lyrical dance to “Where Did My Baby Go” by John Legend. It was a tribute to Noelle Lucivero, a dancer and choreographer who took part in over 20 performances in “Fresh Dance” throughout her college career at New Paltz. She died suddenly last year at age 25.

As a slideshow of Lucivero played, the crowd was moved from smiles and laughter to tears. A light shined stage left on nothing but a single chair on an empty and darkened stage.

WOTS: Nickelodeon Brings Back the '90s, Mouth Watering Burgers, Utah: the US is a Republic

Thu Mar 10 , 2011
Who loves orange soda? Kel loves orange soda. Nickelodeon will be airing classic Nick shows from the ’90s late nights. Pay $25 to see Mike from the Jersey shore at a Virginia club? We’ve got ourselves a situation. Tom Brady, getting down at Carnival. Woah! Eddie Murphy’s ex-wife has a crazy six-pack. There’s […] 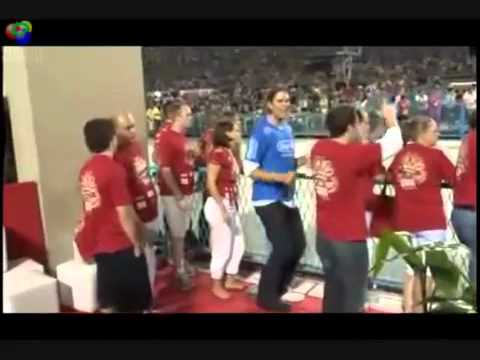