I asked my good buddy, Dean Engle, who co-runs the cassette record label Responsible Records, based in New Paltz, for some upcoming local releases. He turned me onto Breakfast in Fur, a five-piece ambient bedroom-pop band that is on the rise in the New Paltz scene, and who are gearing up to release their debut EP on vinyl. The release date for the physical copy is sometime in early May. However, you can already download the E.P. from their bandcamp page, which, I must say, is quite a delight.

The atmosphere that the Breakfast in Fur E.P. creates is that of a hazy, sun-spattered journey with good friends, spiraling to jubilee with upbeat acoustic guitars and ambient noise. These six songs are layered with intriguing sound, making the E.P. feel greater, much like a full-length. I think their allure has to do with the mature songwriting. Breakfast in Fur conquers what many on-the-rise bands fall short of: sounding original. Too often, young bands tend to sound too similar to their influences, disabling their own creative ability by paying too great a homage to those who inspire them. Breakfast in Fur, however, with its whispery vocals, trilly guitars and minimalist percussion, have created a sound that is all their own, but close enough to the psych-folk spectrum that they do not come off as inaccessible.

Aside from all the technical qualities of the music, I think it’s the E.P.’s hypnotic seduction that makes their sound stand out. On some tracks, the guitars get cyclic, spinning the listener round and round in a trance; ambient sound bites dip in and out; piano and synth melodies drip under the song — this is truly a merit of diverse songwriting. “Shine,” perhaps the E.P.’s standout track, has a folk-meets-orchestra feel to it, with big bass swoops under coats of crazed acoustic guitar. “Flying Saucers,” for example, showcases the band’s instrumental ability to create intertwining melodies and it introduces sound bites to add to the collection of noises used on this more-than-fulfilling E.P.

Breakfast in Fur is one of the many great local bands in New Paltz and, in the future, I hope to spotlight a few more to share. What they do well is something that any band, local or not, should strive for: they aren’t afraid to try new things. They aren’t restricted to their genre, whatever you decide that is. Instead, they let their creative energy take hold, forming a solidified sound while experimenting at the same time. So take a break from the humdrum life of college, papers and tests – keep a look out for local shows and experience the great music that’s around you. I promise it’s there.

Check out one of their tunes below:

Thu Mar 31 , 2011
Muffled sounds stay hidden behind a whitewashed wooden door, but as soon as the door opens the sound of a live blues jam band reverberates through this dimly lit sanctuary. There stands broad-shouldered Jahmaine Fergus, 22, of New Paltz, in his familiar red t-shirt. Underage drinkers fidget around in their […] 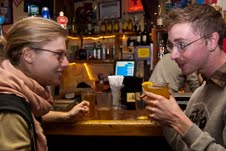