I’ve always been rather fond of Sen. Kirsten Gillibrand. From her brief tenure as a U.S. Congresswoman through her appointment by Gov. David Paterson to fill Hillary Clinton’s vacant U.S. Senate seat, Gillibrand has struck an impressive and independent chord in the political arena. She has a streak of fiscal conservatism, yet she championed progressive causes such as a repeal of “Don’t Ask, Don’t Tell” and a health care bill to support 9/11 first responders. Gillibrand is a rarity in today’s political game – a politician willing to, on occasion, buck her own party.

In 2010 Gillibrand defeated her Republican opponent, former Westchester Congressman Joseph DioGuardi, by a margin of nearly two to one. Her strong performance surprised political observers, given earlier polls had shown DioGuardi holding Gillibrand to a low, single-digit lead. Gillibrand is up for election again in 2012, this time to a six-year term.   One Republican has already expressed interest in challenging Gillibrand, and, to say I’m not a fan of this person would be putting it mildly.

Betsy McCaughey, New York’s lieutenant governor from 1995 to 1999, is reportedly considering to run against Gillibrand in 2012. To provide a bit of history on McCaughey, she was so disliked by her boss, former Gov. George Pataki, that he booted her from the Republican ticket in his first re-election bid. McCaughey retaliated by switching parties and running for the Democratic nomination to defeat her old boss.  However, she failed to win the primary and then quickly faded into New York political obscurity. That is until recently.

In all likelihood, McCaughey would run against Gillibrand on a platform of repealing health care reform. For New Yorkers who are seeing the benefits of reform finally kick in – among them, the ability of those 26 and younger to remain on their parents’ health insurance – McCaughey’s proposals would aim to retract those benefits and leave millions once again uninsured.

I don’t believe McCaughey has much of a shot at unseating Gillibrand. After all a new poll conducted by Quinnipiac University has found Gillibrand with a solid approval of 48 percent and a low disapproval of 21 percent. If you skim over data on all incumbent U.S. senators you actually find Gillibrand among the most popular. Plus, there’s a certain U.S. president atop the Democratic ticket who will probably win rather comfortably in his own re-election bid.

Still, surprises do happen in the political arena and McCaughey has plenty of experience, having been on the New York political scene for nearly two decades. I just happen to think it would be a real shame to lose a senator as effective as Gillibrand. To give you a taste of how McCaughey as a U.S. senator might look like, here’s a recent clip of Rachel Maddow highlighting the former lieutenant governor’s appearance on The Daily Show with Jon Stewart.

Thu Feb 10 , 2011
My problem with The Town isn’t that it’s directed by Ben Affleck. It has nothing to do with Rebecca Hall’s one face for every scene. Even Gossip Girl’s Blake Lively didn’t bother me as much as I expected her to. No, my issue with the Oscar-nominated film is the male lead’s performance. […] 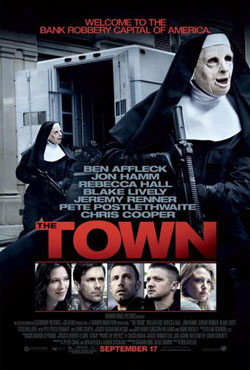