Whether we like it or not, the world is on it’s way to becoming completely digitized. Those who continue to deny the technological revolution, with newspapers and CDs clutched tightly in their hands, will simply be left behind. The United States military forces have been quick to recognize this and have remodeled their entire approach to warfare based on this emergent technological zeitgeist. Historically always at the forefront of any cutting-edge technological developments, the American armed forces are now utilizing virtual reality environments as a new-and-improved method of combat training.

Although these techniques have been criticized as falsely disguising the atrocities of face-to-face combat, the military defends immersion training methods as doing just the opposite. After watching multiple videos on this changed aspect of warfare on PBS’s Frontline website, I believe that there are more benefits than detriments to this type of training.

The ITT creates authentic settings using Arab-American role players acting as civilians, virtual enemies and civilians projected on walls, authentic olfactory cues and market place and courtyard settings. Challenges are generated within this interactive environment in order for troops to practice and develop fundamental decision-making skills. Soldiers run through these controlled situations repeatedly in order to learn from their mistakes and develop better reactive skills to unpredictable problems. Constant submergence in these imitative virtual scenarios is also meant to help familiarize soldiers with the emotional and mental stress that real-life combat tends to inflict on veterans of war.

Realistically, I think that exposure to this sort of multi-sensory virtual combat training will help soldiers more than hinder them. In the web interview titled “Virtual Training,” P.W. Singer questions if the psychological distance created by a virtual environment, “leads people to do things…that they wouldn’t do in real life,” and follows with an ominous quote from a special ops officer that, “Anything that makes it easier to kill is not necessarily a good thing.” I agree with Singer’s original comment but not with his dystopian implications. I think that in the context of effective military training, virtual worlds will lead people to do things that they wouldn’t do in real life, like fire a weapon more accurately and confidently.

Immersion training facilities such as ITT in Camp Pendelton offers inexperienced soldiers something important that real-life does not: re-dos. They are able to develop their skills and shooting accuracy in a controlled environment and reduce the chances of making fatal mistakes in a real-world situation. As Albert Rizzo discussed in the video “Stress Inoculation,” putting soldiers in these stimulated environments helps prepare soldier’s emotionally, mentally, and physically for the “real thing.”

Although some aspects of the ITT training may seem like a new tier of video game, one soldier interviewed in “Immersion Training” says that no soldier holds any illusions about the brutalities of real war. “It doesn’t compare to video games,” he said, because nothing can replace the actual experience of “kicking through a door” and shooting live rounds. Although the true effect on soldiers being trained in virtual reality remains unknown, it seems for now that there are more benefits than detriments to this type of training.

Thu Dec 9 , 2010
Karen Wallace, an accomplished children’s and young adult author, graced SUNY New Paltz with her very pleasant presence on Dec. 3.She came to welcome the start of the play Wendy, based on her young adult novel of the same title. She also gave a lecture and conducted a writing workshop, […] 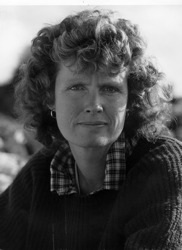