With the economy continuing to struggle, many colleges, both public and private, are being forced to cut their budgets significantly. The SUNY system has reallocated more than $400 million in the past two years, forcing the reduction of programs across several campuses. Despite this, one thing that has not taken much of a hit is the salary of a college president.

A recent study by The Chronicle for Higher Education shows that during the 2008-2009 fiscal year, the number of chief executives nationwide who earn more than $1 million annually increased to 30, up from seven people from the previous year.

The study, which examined the tax papers of 448 colleges nationwide, showed that the majority of presidents earned between $200,000 and $399,000 annually.

The average salary for full-time professors, however, is much lower. In 2008, a full-time professor at Quinnipiac University in Connecticut earned on average $118, 000, compared to the $1.8 million the president earned through salary and bonuses.

On the campus of SUNY New Paltz, the disparity between professor and presidential salaries isn’t as staggering.

According to Shelly Wright, the associate vice president for communication in the office of the president, Interim President Donald Christian earns $200,000 annually, which falls in the average range for chief executives nationwide. He was given a $25,000 salary increase when he assumed the position. Former president Steven Poskanzer was earning $239,500 when he left office this past June, Wright said.

When compared to other SUNY schools, New Paltz allocates considerably less to faculty and presidential salaries. Binghamton University, Stony Brook University, and SUNY College of Environmental Science and Forestry all rank among the Top 500 faculty salaries nationwide on StateUniversity.com, whereas New Paltz did not appear on the list.

According to Binghamton’s newspaper Pipe Dream, the school’s Interim President C. Peter Magrath is expected to earn $355,000 this year, while Stony Brook’s president, Dr. Samuel Stanley, is the highest paid college president in the SUNY system, with a salary of $400,000.

Despite this large earning difference, there are certain perks to being the president of SUNY New Paltz.

According to Wright, Christian is given a state vehicle to drive during his term as interim president, something former President Steven Poskanzer enjoyed as well. These benefits will be made available to the new president when he or she takes office.

Wright also notes that the college president does not receive any additional health or dental benefits because of the position. He or she has the same plans as other SUNY New Paltz employees.

One thing is certain: someone new will hold the title “president” come July 2011. Throughout his term, Interim President Christian has been candid about his intentions to return to the office of the provost once the new chief executive has been selected.

The new college president’s salary will be set by SUNY Chancellor Nancy L. Zimpher, and has yet to be announced.

Thu Dec 9 , 2010
A young priest walks into a prison and is immediately stripped of his identity. The security guards take his license, wallet, and cross necklace. He hears the echo of the stone walls, sees the dullness of color and begins to feel disoriented. It’s like living in a gymnasium. He notices […] 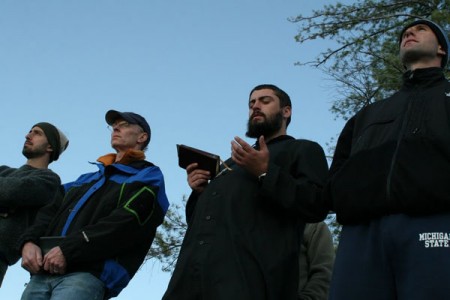