Jen Danio begins her first year as an assistant coach with the SUNY New Paltz women’s basketball team in the 2010-2011 season. Danio learned her craft playing for SUNY Purchase, where she became the program’s all-time leading score with 1,868 points. Danio served as the team’s captain during her junior and senior years of college, and was named SUNY Purchase’s Female Athlete of the Year for 2007-2008. She earned her bachelor’s degree in liberal arts and communications in 2009.I sat down with this Staten Island native to discuss her duties with the team, her goals and expectations and her vision for the future.

Why did you decide to come to New Paltz?

I wanted to get into coaching right away. I talked to the former assistant and others who have experience with this program and have nothing but great things to say. They all talked highly of the program, saying it was well coached. New Paltz seems like a comfortable place for me.

What are your responsibilities on the team?

I help run the offense and help with recruiting. Also, during the practices when we run inner- squad scrimmages I coach one team while Jamie [Seward, the head coach] leads the other team.

How do you think your talents will help the squad?

Playing four years of college ball helped me gain the experience of what to do in certain situations. I’ll also be able to provide a different perspective of a former player to help the team accomplish its goals.

What are the team’s goals and your expectations?

My ultimate goal for this team is to win a national championship. We will get there by improving on both sides of the ball. I hope to make sure the players are learning and the skills we teach them are being used effectively. My expectation is to win the SUNY Athletic Conference championship. We should win at least 20 games, remain competitive even against the best teams and to continue to improve.

Where do you see yourself in five years?

I want to be a head coach someday for a Division I or II team.

Who is your biggest inspiration?

I would have to say my former head coach, Steven Loscher, because, like Jamie, he is constantly giving 100 percent. He always have the drive and competitiveness to continuously to learn and improve.

The Captain’s Corner by Chris Valdez

Hawks vs Knights 2010 by Chris Valdez

Thu Dec 2 , 2010
When Janice Cyr heard that her rent was going up, she was worried. “I felt this lump in my stomach,” she said. “I just thought, ‘we’re not going to be able to survive this.’” In the end, the Shawangunk Running Company could not survive. The specialty sports store just off […] 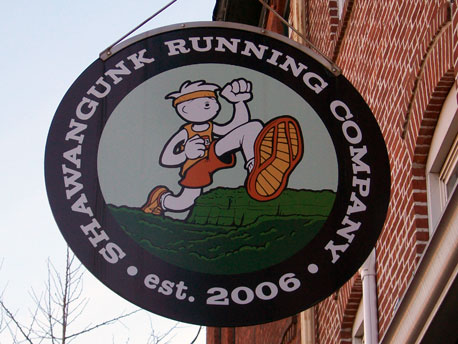