For my final update of the season, I am going to suggest a series of books that, in all honesty, I have not completely read yet myself. I have read the prequel to the series, the first book of the series, and the first half of the second book of the series. I have also seen all of the movies based on these books countless times. As I read on, I am 100 percent sure that nothing in the books could sway me from loving them, and basically worshiping them and their author beyond sanity. I’m positive I am not steering you wrong by mentioning and praising J.R.R. Tolkien’s Lord of the Rings trilogy, and his prequel to the trilogy, The Hobbit.

The Hobbit was published in 1937 as its own novel, and The Lord of the Rings followed more than ten years later because of debates amongst the publishers. According to the prologue of The Fellowship of the Ring, Tolkien originally intended the story to be one volume divided internally into separate books, but publishers decided to print three separate novels, therefore creating the trilogy.

The Hobbit follows the early life and adventures of the hobbit Bilbo Baggins and the wizard, Gandalf the Grey. In this book the wretched ring is discovered in a cave by Bilbo who did not know its true powers and evil, so he kept it and had it for many years, as he had a very long life, even for a hobbit, who tend to live beyond 100 years anyway. This book is an introduction to the world of Middle Earth and all of the wonderful and horrible characters and creatures in it. It is the beginning of the epic story that follows, which follows the adventures, trials, and tribulations of Bilbo’s nephew, Frodo Baggins. In The Lord of the Rings, consisting of three novels, The Fellowship of the Ring, The Two Towers, and Return of the King, Frodo finally inherits Bilbo’s ring, which he reluctantly but eventually gives up. When the ring passes on, its true master and maker Sauron, the source of the evil in Middle Earth, sends out all of his minions to retrieve the ring and destroy those who kept it from him for so long. All of the creatures on the side of the light, the elves, dwarves, hobbits, men, and ents, form a reluctant alliance to keep the ring from Sauron so that he can never regain his full strength and is forced to remain a watchful and restless fiery eye atop a great black tower.

In these books the smallest person is the most influential. Heroes come in all shapes and sizes.

Tolkien has created a genre with these books: the epic fantasy/fiction adventure story. His characters, his landscape, his history, even the languages used in the novel, were created by this genius. Many have tried to follow in his footsteps, some have succeeded, but not in the way that they have matched the popularity and originality of The Lord of the Rings.

In the first entry of this blog I established myself as a reverent Harry Potter/ Rowling fan. But in all reality, I read The Hobbit before I ever even heard of Harry Potter. These books are closer to my heart than any other stories ever written because they run in my blood. My father read all four of these books and loved them before I was even a thought. He was the one who bought me The Hobbit and told me to read it. He was the one who took me to see the Lord of the Rings movies when they came out in the theaters, and he was the one who bought me the book series, which for some reason or other sat on my shelf and collected dust until a couple of months ago, when I finally picked the books back up and started reading the first book of the trilogy, The Fellowship of the Ring.

I think my reverence for Gandalf the Grey is born out of the hero-worship I used to have for my father when I was little. He was my original hero, but now that I am grown and see that he is just a man, although a great and beloved man, my hero worship passes on to figures who resemble him, like the gray-bearded, subtly powerful, modest, reliable, magical Gandalf, of whom I soon plan to get a tattoo.

Although for you these books may not have the sentimental value that they have for me, it is still ESSENTIAL to read them, if you consider yourself any type of fan of fantasy, science fiction, or adventure. Don’t forget, The Hobbit comes first, and the rest follow after.

The reading takes a little longer than say, Harry Potter, because of the language and detail, but they are all the better for it.

And don’t compare these books to anything else while you’re reading, because Tolkien created the genre and the creatures that now cast all of our sci-fi/fantasy novels, movies, and video games.

Thu Dec 9 , 2010
The Kinks, The Mekons, Tall Dwarfs, The Clash and The Velvet Underground. These are the top five all-time favorite bands of John Lefsky, the owner of Jack’s Rhythms in New Paltz. The walls of Jack’s are plastered with posters of Joy Division, Elliott Smith, Fugazi and The Cramps: Lefsky’s list […] 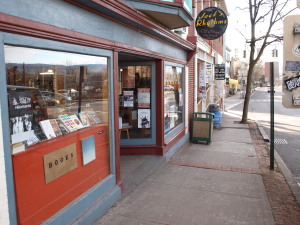