When one thinks of Wisconsin…one doesn’t really think about it too long. It is uninteresting, boring; a vast, blank spot on the map of America. Maybe Laverne and Shirley or brewing companies come to mind, if you grew up watching Nick at Nite like I did, but mostly, Wisconsin goes on unnoticed, unacknowledged, unappreciated.

Fortunately, one man thought about Wisconsin. In fact, he thought about it so long that he wrote a novel. Robert Goolrick takes advantage of the void and fills it with fascinating characters. He realized that when there is nowhere to go and nothing to do, people will get creative, and sometimes violent and malicious, to entertain themselves. He also realized that violence and bad intentions make a great story.

In Goolrick’s A Reliable Wife, every character is fascinatingly questionable. Do I like him? Do I hate her? Do I want him to die? Do I want them to get caught? Or do I want the wicked scheme to succeed? These are some questions you ask yourself when reading Goolrick’s gothic novel set in the early 1900s in Wisconsin.

This is one of those fantastic stories where every character is a potential victim and a potential criminal. No one character is innocent…in the beginning. You sympathize with the flawed and the evil instead of the archetypal “good guy.”

I’ll warn you that the novel starts out a little slow. But once you get through the first chapter or two, it is entirely worth it. This novel is unlike any I’ve ever read because of the way Goolrick combines content and style. The writing is fragmented, but realistic, and fitting for each character that is speaking or thinking at the time. Each scene is set in extreme detail, and each character is developed in past, present, and what they want or think they want for their future.

This novel is also very adult in content and style. I can’t imagine a young teen reading this and getting much out of it because the novel is filled with a deep sadness; but is even more interesting for it.

Fri Nov 5 , 2010
“Why don’t they care?” “I thought this was their time for change?” These sullen musings periodically escaped from the minds of old men and slipped through the cracks of their half-smiles, only to bounce off the dimly lit rafters and empty seats of a downtown New Paltz bar, 36 Main. […] 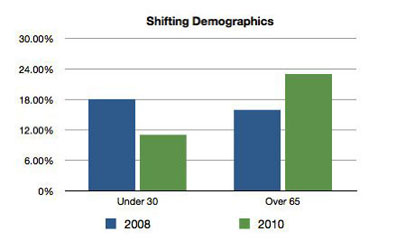