Doors were set to open at 9 p.m., so I arrived promptly at 8 p.m. to get a decent parking spot and front row seat. The venue itself was small and did not serve alcohol, something The Questionable Authorities were not accustomed to.

The Questionable Authorities is a punk rock band, but they’re not just any punk rock band — they’re made up completely of SUNY New Paltz professors. You can read about them [here.]

The members didn’t care about the venue’s small proximity. They brought their own extravagant, yet tasteful, lighting show. There were also a good number of Questionable Authorities t-shirts worn amongst the crowd, something the band prides themselves on.

Brian Obach, the band’s rhythm guitarist and a sociology professor, promises to buy an alcoholic beverage for anybody who wears a Questionable Authorities t-shirt in another country and takes a picture of it. In addition, and most importantly, the band will put the picture on their Facebook page for the world to see.

Annee Roschelle, the flutist and a sociology professor, was unable to make the first leg of the tour because she was out of town. Despite the loss, the band was in high spirits and fully prepared. During the preparations, I noticed, out of the corner of my eye, a man with a bagpipe wearing a kilt; I thought nothing of it. More and more people started filtering in once 9 p.m. hit, making it a decent turnout, considering that it was a Saturday night in the swinging town of New Paltz.

Obach, bassist/biology professor Maureen Morrow, and drummer/sociology professor Peter Kaufman were decked out in rock n’ roll attire. They all had on black t-shirts. Obach added a top hat, Morrow added a black suit jacket, and Kaufman added a beanie, all of which fit nicely into the rock n’ roll accessories category.

However, I did become rather skeptical of psychology professor and lead guitarist Glenn Geher’s ability to rock out after seeing his outfit. He had on a white t-shirt and a pair of gray Crocs — a rock n’ roll no-no. He was going to have to prove himself to me.

The Questionable Authorities kicked off the show at around 9:30 P.M. with three Ramones’ songs. Obach sang on “Blitzkrieg Bop”, and “I Wanna Be Sedated,” and Morrow sang on “Sheena is a Punk Rocker”.

Morrow had a very shy sound and demeanor to her, while Obach had a little bit more enthusiasm. Musically, they did Joey Ramone and his pals justice, especially Kaufman, whose drum fills were executed flawlessly, but it was kind of a boring opening.

To the band’s credit however, the crowd was awkward and seemed confused as to what to do at a rock show. Nevertheless, the show rolled on. They followed The Ramones songs with an interesting take on The Monkees “I’m a Believer.” It started off soft and slow for the first 30 seconds or so, then the band instantly sped it up to their normal punk sound. Morrow sang on it and seemed to have more confidence as the crowd started showing signs of life.

Next up was The Romantics’ “What I Like About You.” Morrow took lead vocals again, singing it very well, and getting superb backing vocals from Geher and Obach. The backing vocals are very important to this song and the band nailed them.

We also saw the first guitar solo of the show from Geher, who played it mistake free.

Right at the conclusion of the song, a bunch of Geher’s students showed up, right in time to hear him take lead vocals on a rendition of the Spiderman theme song. He seemed uncomfortable singing it, as he was looking down at his guitar a lot, but he redeemed himself with another guitar solo.

This solo was more challenging than the last one, and once again, was performed mistake free. At this point, the crowd was into it and there were a few dancers. Even a woman in a foot cast managed to work her way to the front to dance for a little bit.

Katrina and the Waves’ “Walking on Sunshine” was by far Morrow’s best display on vocals. It was the highest pitched song in the band’s set and she sang the notes effortlessly. Geher had a nice solo once again as well. Next up, Obach sang on Cracker’s “Teen Angst”. It had a massive sing-a-long chorus, which caught my ear. Geher’s guitar was also very active in this song, as he finished up the song with an insane guitar solo underneath the big chorus. At this point, Geher had outplayed his outfit and proved himself to me as a guitar virtuoso.

The Questionable Authorities were taking The College Terrace by storm. The crowd was singing along, dancing, and being merry, but then the unthinkable happened.

The Questionable Authorities summoned to the stage the man with the bagpipe wearing a kilt, the same man I had noticed during the preparations.

His name is Alex Bartholomew, a fellow New Paltz professor from the geology department. Now, aside from AC/DC’s “It’s a Long Way to the Top,” I’m not a fan of bagpipes in rock n’ roll, so I was leery of the outcome. Sure enough, he played alongside the band as they did Slade’s “Run Runaway” and killed it.

The bagpipe fit in perfectly with Geher’s guitar sound and made for quite a song, burying my doubts about bagpipes in rock n’ roll…..for now.

The Questionable Authorities capped off the gig with Obach singing The Violent Femme’s “Blister in the Sun” and “Add It Up.”

“Blister in the Sun” was their best song of the night. Morrow was really moving up and down the bass for the first time and Obach’s voice shined with the chorus.

The younger members of the crowd were getting rowdy. A young boy got up to dance and accidentally whacked me in the face when he flew his hands back mid-jive — so much for that front row seat.

Overall, it was a good show. Nothing was out of the ordinary either good or bad, but it was a fun show because we got to hear some classic songs that we could sing and dance to. Obach hit it right on the head when he told me that “Cover bands are really the heart and soul of rock n’ roll.”

It’s fun, it’s passionate, and you can see that the performers are just huge fans of music. They aren’t in it for money or fame — just to pay homage to their favorite songs and feed off of the crowd’s support.

You can catch The Questionable Authorities on Facebook and YouTube. They have two shows left on their fall 2010 tour. They will be at Snugs, in New Paltz, on Saturday, Oct. 23 and Dec. 4.

Thu Oct 28 , 2010
A stereotypical college professor is the picture of wisdom, precision, and hard work. With a tweed coat with elbow pads, they drag through their many classes Ben Stein style, without ever learning anybody’s name, and leaving no room in class for discussions or debate. There’s no way a college professor […] 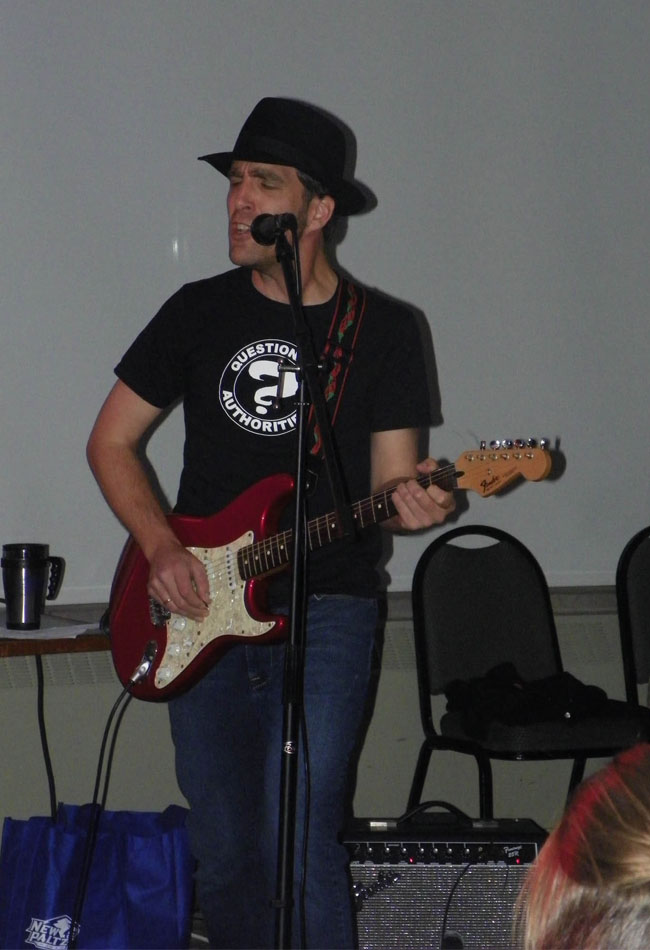