SUNY New Paltz students and faculty experienced a taste of royalty last week, when Crown Prince Alexander Karadordevic II of Serbia spoke at the Honor’s Center about his efforts to institute a constitutional monarchy, and his view for Serbia’s future.

Clad in a suit with a light blue shirt and red tie, Karadordevic, along with Serbian Crown Princess Katherine, met with around 100 individuals to articulate his desire to implement a fair democracy in Serbia, advance the country’s economy and become a member of the European Union. Karadordevic said he has always been very ardent defender of democracy and human rights.

After the collapse of the Soviet Union in 1991, the Crown Prince became one of his country’s leaders in its fight to shake the World War II wounds and reconstruct a country based on democracy and equal rights.

In an attempt to garner strength in the fight for democracy, Karadordevic stayed in contact with democrats throughout former Yugoslavia and held three conferences, most notably in April 2000. The purpose of the meeting, he said, was to “unite democratic leaders and agree to work together on the principles of democracy.”

The Crown Prince said the April meeting was “extremely successful” in helping to elect a democratic leader of Serbia in September of that year.

Karadordevic has also fought to fix Serbia’s withering economy by sending workers abroad.  He said that citizens who work abroad are able to send currency back into the country and help bolster local business. He is also attempting to lure foreign investors and improve the nation’s public relations.

“We must depend on the young generation who will be the leaders into a better future,” Karadordevic said.

Despite the advances Serbia has made since the end of the Cold War, Karadordevic said that more progress is still to come.

“There is no democracy at midnight,” Karadordevic said.

Thu Oct 28 , 2010
Just nine days before an election expected to be riddled with incumbent casualties, popular Democratic U.S. Sen. Chuck Schumer and his Republican opponent Jay Townsend took their differences to the debate room. The often contentious debate was held Sunday night at Marist College in Poughkeepsie, NY. The questions addressed the […] 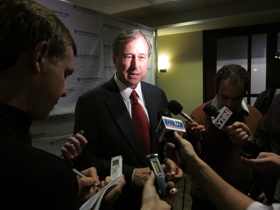