On Saturday, September 4, the first annual Hudson Valley Green Festival closed with an energetic performance by nationally acclaimed band Blues Traveler. The band is most well-known for their songs, “But Anyway,” “Run Around,” and “Hook.” Less known is their love for the Hudson Valley and efforts to leave behind a smaller carbon footprint. One band member told me their tour bus has recently switched from plastic cups to strictly biodegradable cups for their coffee. But anyway, (get it?) before they sped off to Connecticut for the next stop on their tour, I caught up with guitarist Chandler Kinchla to talk about the band’s environmental commitments and their reactions to their audience. What I got was a sense that Kinchla might have rather been at Burning Man, a week-long no holds barred festival in Nevada’s Black Rock Desert. I also got a hug.

Emily Atkin: When did you guys get asked to perform at Green Fest?

Chandler Kinchla: Actually, the promoter is an old friend of mine from when we used to record up in Bearsville. And we got to know him when we were recording Four, in Bearsville, and we recorded our next album, Straight on Til Morning, up there in Bearsville. So this is kind of our area. When we actually got asked to do it is lost in the sands of time, because I don’t handle the specific dates. It went through our agent. But this is an area where we’ve spent lots and lots of time and recorded a lot of great albums, so it’s nice to be back up here.

EA: So was it more about being up here, or was it about the cause of the festival?

CK: I’ll be honest, when we’re touring all over the country we get offers all the time and this one seemed like a really good one, so we added it in. But I mean for us, its nice when the place and the cause work together.

EA: Did you get a chance to browse the festival, look at any of the booths?

CK: I actually just flew in from Dallas, where I was helping my friend get costumes and pack for Burning Man, which she’d never been to before. She’d never been, and I’d been a lot, so I was like, come down, I’ll help you out! She’s like, freaking, like “What am I gonna wear!” So I was like alright. We brainstormed, went costume shopping and got her all set. So I had important things to do. Had to send her to her first time at Burning Man, without me.

EA: So, what you’re saying is you didn’t browse….

CK: [interrupting] So, how awesome is burning man? It’s awesome. Everybody must go.

EA: How was the show?

CK: The show was great, the crowd was terrific, it was a beautiful sight, a beautiful night, and even in the afternoon it was gorgeous down here by the lake.

EA: Wait, so you WERE here earlier, is what you’re saying?

CK: Well, I mean, I was here this afternoon, but just got back here. Looking at the wonderful lake, recovering from my crazy last 5 days with my friend and Burning Man and all that.

EA: Any standout moments in the show? Any songs that went particularly well?

CK: No. Talking with you right now.

CK: [Talking into my recorder] That’s the sound of us hugging, you hear that? We’re hugging right now.

Thu Sep 16 , 2010
The rallies, the signs, the costumes, the anger – it seems the persistence of the controversial Tea Party movement in the last year is starting to pay off. In a shocking New York gubernatorial primary Tuesday night, Buffalo businessman and self-proclaimed “baseball bat” wielding candidate Carl Paladino beat the heavily […] 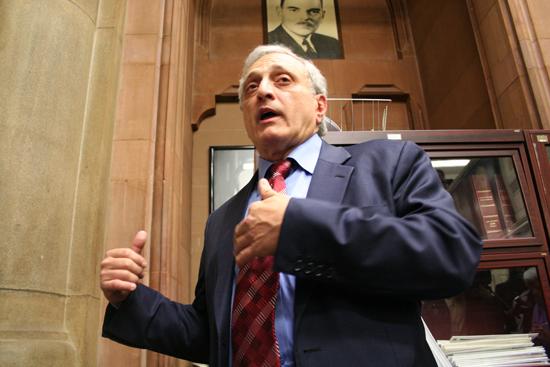