It’s hard to know which politicians in Albany can be trusted. After reporting on them for more than four months, the thought of a lawmaker whose main concern does not ultimately lie with their own well-being is laughable. Even when I begin to feel good about a lawmaker, I remember his incumbency is a testament to the fact that he plays the political game. He votes with his party, as not to cause a fuss or an issue with his leadership that doles out member items and powerful committee chair positions. Issues such as these make me consider what qualities New Yorkers should be looking for when deciding who to vote for in the upcoming elections.

Two weeks ago, a colleague of mine wrote an article about Luke Martland. Martland is running for the 46th Senate District seat, which has been occupied for seven terms by Sen. Neil Breslin. His rhetoric intrigued me and I found myself at the end of the article gunning for his election. It was not because of where he stood on policy, but rather because of the article’s first quoted sentence from him: “I am not a politician, and I don’t want to be a politician.”

It may seem strange at first to hear a politician say he doesn’t want to be one, but it is one of the most important things when dealing with a position so easily corrupted. A seat in the state Senate is hard to get and easy to keep — all one has to do is play the political game. Vote with your party rulers, don’t stray based on what you really think is necessary for the people and you will get the benefits that come along with it, listed above. Even when one comes into office for the purpose of enacting good policy, election season always comes along. Then the decision for himself has to be made. Do you make choices that might benefit the public or choices that will definitely benefit yourself? Someone who wants to be a politician will most certainly pick the latter.

This argument is not new. It is age-old and comes most recognizably from Plato’s Republic, where the Greek philosopher splits society up into three categories: those consumed with appetite, those who strive for honor and pride and those who strive for “the good life,” or simply put, philosophy and wisdom. He argues that, though appetite and honor-ruled people are most likely to be leaders, the philosophers must take up the position. Through their knowledge, they alone understand how to best achieve a good life and how to produce characters within people that appreciate such knowledge. Although they would much rather move to the forest and study life, they understand the nature of most human beings. Those ruled by appetite or honor would ultimately corrupt society for their own well-being, and therefore the philosopher must give up his needs in order to avoid the creation of a tyranny.

In today’s world, Plato would argue Albany’s current political system is run by a slew of hungry animals. He might even argue that the current system is a tyranny disguised as democracy, run by a man that is widely considered the most powerful person in New York — Assembly Speaker Sheldon Silver.

In contemporary politics, Martland might be the closest to a philosopher-ruler that Plato could hope for. Martland said that when he viewed the legislative process he was “frustrated and then disgusted,” and actually resigned from his post as council to Gov. David Paterson. But his philosophical wisdom led him back, knowing that reform could only come from someone who didn’t want to personally benefit from the system. But even if Martland is elected, he contends that he would term limit himself — a wise decision, but as Plato would argue, a bad decision for society.

Sun Apr 25 , 2010
Deana and I were laughing about something Jeff had said when his green Chevy Trailblazer hit the deer. The laughter stopped, and with only one headlight beaming, we walked outside to check the damage. The grill was bent and bloody hair was sticking out of it. We saw the limp deer […] 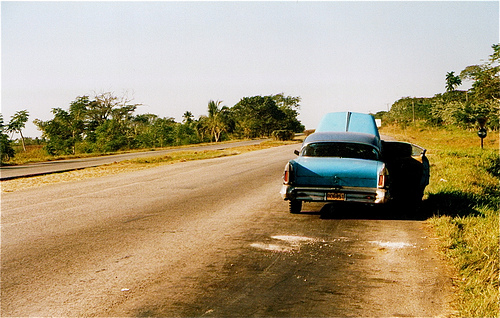