The event, held by the Student Association (SA) Senior Committee, was targeted toward seniors headed into the job market. Ann Taylor, The Gap and Banana Republic donated more than 100 looks for the 16 models to wear during the two-hour long fashion show.

SA President Stephanie Samuel described the show as a guide for seniors who will soon be emerging into the workforce. “We really wanted students to know that once you graduate and go into the real world it is essential to know how to dress everyday and actually look the part,” Samuel said.

The show, which took more than three months to plan, was set up like a business meeting on stage. Samuel, along with her co-host Terrell Coakley, took the stage around 8:30 p.m. to introduce looks and interact with the audience.

“We are looking to hire top potential,” Coakley said as he entered the stage. Their company name was “Senior Celebration,” and the co-hosts welcomed the audience to their mock interview. As the DJ spun songs by Jay-Z, Beyoncé, Trey Songz and Drake, the audience clapped and cheered as Samuel and Coakley sent the first models down the runway.

There were five scenes to hit the runway that night: interview, daily wear, casual Friday’s, meetings and dress yourself, which allowed models to wear business clothing right out of their own closets. Models were given freedom to choose their own outfits as they went shopping at the three donating stores located at the Woodbury Commons in Central Valley, N.Y.

“All the outfits came from our ideas, it’s just their clothing,” said Kim Bell, fourth-year communications disorder and sociology major. “That’s why it has been so much fun because these are things we would wear.”

For a daily wear look, a male model paired a blue and green argyle sweater with dark gray pants, a black belt With the shows budget under $1,000, models were responsible for their own hair and make-up and depended on previous experience of runway shows to make this low-budget show into a high-quality event.

Rhonda Mccarter-Cullen, co-manager of Ann Taylor, was very impressed by the student-run fashion show. She said her company was very excited to participate in the event and even donated shoes and accessories for the women to wear.

“I’m hoping that seniors see that dressing for their career choice isn’t as expensive or as hard as they think it would be,” she said. “They can buy clothes they really enjoy wearing to the office and might actually enjoy wearing outside the office.”

Throughout the show, raffle prizes were given away to audience members. Prizes included a $20 Stop & Shop gift card and $50 gift cards to each of the participating clothing stores.

“We wanted the audience to be able to take what they learned from the show and use it,” Samuel said.

Although some of the designers are not completely on a student’s budget, the show was all about mixing and matching. Mccarter-Cullen said that people don’t need that many clothes to actually have a nice wardrobe for the business arena.

One female model paired a knee-length gray skirt with a floral print blouse underneath an orange cardigan sweater. She finished the look with classic pumps and minimal jewelry.

“Dress for Success” was the first Senior Committee event, and Samuel is looking to make this annual.

“We thought it was really important to celebrate seniors graduating and we think it’s important to give back to the New Paltz community all at the same time,” Samuel said. “I think the show went really well and I enjoyed how different it was from other shows on campus. We are laying the ground work for years to come.”

Before the Whistle Blows

Sat Apr 3 , 2010
The State University of New York at New Paltz Women’s Volleyball team practice just ended and Kelsey Garmendia, a second-year student, is icing her shoulder to alleviate the excruciating pain. After practice, she often feels as if her shoulder is out of its socket. Initially being an internal impingement, the […] 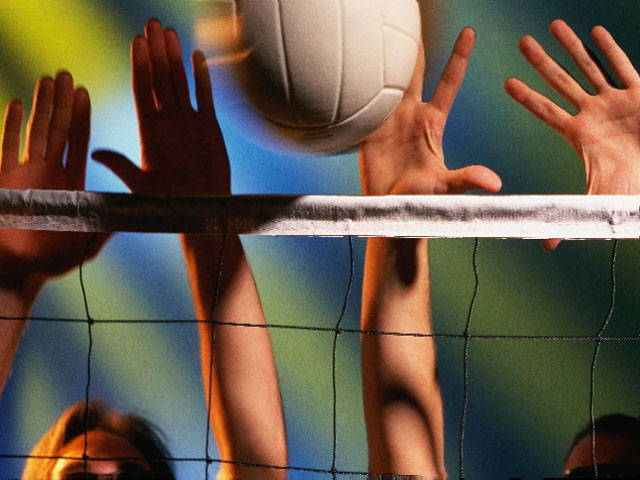